You are here: Home / Community / The 75th Anniversary of D-Day ~Remembering the Brave~ 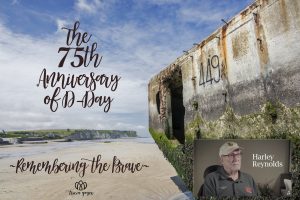 Today, on the 75th Anniversary of D-Day I’m thinking of my friend Harley. This is his story that he shared with me of that day.

I woke up the morning of June 6, 1944, knowing the next day I would wake up in France . . . if at all. As a machine gun section leader for the First Infantry Division, this would be my third invasion. The first was at Arzew in North Africa. I was part of a special team ordered to avoid all fighting, instead going directly to and securing the vital bridges that crossed the river to Oran. Bridges that proved vital for the troops coming behind us.

The second invasion was in Gela, Sicily as a machine gun squad leader. At Gela we freed American prisoners that had been captured in North Africa and faced angry enemy fire on the beaches. Now I expected to be under Nazi fire once more. But from the first moment, as our landing craft moved toward the rendezvous area, I knew this invasion of France wouldn’t be playing out as gracefully as it was orchestrated.

The small green light from the boat we followed appeared and then disappeared again, as we rose and fell with the waves. The water was getting rough, and I thought several times we would crash into the craft ahead of us. A line of glowing phosphorus trailed our boats. Would the Germans spot it and pinpoint us?

We were trained to keep our heads down until time to unload, but being in command I wanted to know what was going on around us. I looked over the side many times. What I saw caused my heart to pound. During training we’d been informed of the planned invasion, and our part in it, but to see the plan come together was mind-boggling. No cameras filmed the pictures left in my mind. And as I viewed the scene, both fear and responsibility rose inside.

An unimaginable number of ships and craft materialized with the light of dawn. Transport ships unloaded troops and equipment. Battleships cruised the shoreline, firing just over our heads, point-blank at the beach. Landing crafts, by the hundreds, shuttled to and from the shore.

As we approached, crafts behind us shot rockets, attempting to blanket the beach with fire and providing shell holes for our cover once we made it on shore. Unfortunately, most shells fell short and there were no holes for us to use as cover once we hit the sand.

Planes had also bombed the beach earlier, but I saw very little evidence of their handiwork. In fact, there was a noticeable absence of planes over our beach as we approached—even German planes, which I was glad of. I later learned our planes were inland, keeping enemy planes grounded. Thank God.

We circled for what seemed like hours in our rendezvous area, near enough to hear the action on the beach. There wasn’t much conversation. Instead, we swapped glances as we listened to the small arms fire. We were in for a hot reception, and the waiting is the worst.

The coxswain steered our boat in and called to the other crewman. “This is it! Here we go!” He thrust his hand foreword like a cavalryman’s charge. His face was calm and determined from his place at the armored box on the port stern.

Another crewman was in a similar box on the starboard stern. A machine gun was mounted in front of him. But even to this day I can’t remember if he ever fired a round.

I eyed my team. Ours was the Headquarters Squadron, made up of myself and the company radioman, ready to disembark first. Two machinegun squads, one on either side of the boat was to come off next. First Squad Leader was Sgt. Dean Rummell, from Cherry Tree, Pennsylvania. And Second Squad Leader was Sgt. James N. Haughey of Sheridan, Indiana. Then came company headquarters personnel: messengers, wiremen, and our company commander—disembarking last to make sure that everyone got off the boat.

We had practiced our landing formation many times before. We would draw a line on the ground with stakes and ribbons to mark off the same size as our landing craft. Now it was the real thing.

Yet our timing for our landing at intervals was as much awash as the storm. Some boats made it back after unloading. Others were partly washed on shore, struggling. Some bottomed out, racing their motors and getting nowhere.

We were supposed to land twenty minutes after the assault wave, yet as we landed some of them landed with us. Confusion doesn’t really describe it. Behind us other crafts took direct hits. Some even flipped sideways, dumping troops into the water.

I saw some craft heavily damaged by shellfire being tossed around by the waves. I saw others empty of troops and partly filled with water as though abandoned, awash in the surf. Men struggled for the pitiful protection they gave.

Bullets flew all around us—overhead and hitting the water. I wondered if they would hit us too. Foremost on my mind was getting as many men off as possible, and into positions of safety on the beach.

On my last look over the craft’s side, seconds before the ramp went down, I spotted motionless bodies at the water’s edge. Beside them wounded men struggled through rough surf. Others lay in the water with only their heads exposed for the protection it gave them.

I don’t remember my feet hitting water, but as I fanned out, the radioman was hit beside me, falling. Another one of our crewmembers was hit too. I darted to the right, looking for any cover. Seeing none, I headed for an obstacle made up of what appeared to be rails welded together. It reminded me of the balls and jacks we played with as kids. Too many bullets were flying not to be hit. While crossing the beach, I felt tugs at my pants legs several times. Bullets hit the sand in bursts and ricocheting in front and to the side of me. What was keeping me up?

Then I spotted a sort of raised roadbed running parallel to the beach. Many men were lying behind it. Looking like the only cover, we headed for it too. As soon as I reached the safety of the shingles I called out, asking if the others were okay. Two of my men answered. “Yes.” We waited for what seemed like hours, under very intense machine gun, rifle, mortar, and artillery fire, until the tide almost lapped at our feet. Dead bodies were washing in, and I knew we couldn’t remain there. We had to do something. But what?

The unexpected help came from a small man, pushing a bangalore torpedo under the wire on the roadbed. I don’t know where he came from; suddenly he was there within a few feet. The torpedo was in two sections. He exposed himself to put the first section under the wire, and I yelled to Rummell and Haughey. “We’re going through!”

The torpedo man exposed himself again to attach the second half of the torpedo. Then, he very carefully inserted the fuse lighter, turned his head my direction, and pulled the string. I braced myself for the sprint forward but nothing happened. The fuse didn’t light. After a few seconds the man calmly crawled forward, exposing himself again. He removed the bad lighter, replaced it with another and started to repeat the first moves. He turned his head in my direction, looked back, pulled the string and then flinched. All of a sudden, his eyes seemed to have a question or pleading look in them, and I knew a German bullet had hit him. Death was so fast for him, but his job was complete. The torpedo blew, making a clear path for those coming behind. He was one of the greatest of the unknown heroes of Omaha beach.

Knowing what I had to do, I went through the trip wire, high stepping it just as we did on obstacle courses. Troops on the beach held back, but not for long. They almost beat us to the top of the hill.

This was just the beginning of the invasion for me. I faced a pond to cross, minefields to weave through, and witnessed bodies blown up before my eyes. More men sacrificed their lives, doing their jobs while additional soldiers streamed forward to join us at the top of the bluff.

There were heroes that put themselves in harm’s way, and others who were excited to be injured, heading back down the beach, knowing the war was over for them.

And still more men came. As I looked back at the beach from the top of the ridge, I noted that it continued to fill with vehicles and troops. They streamed inland, ever moving forward, fighting their way to the bluff.

As I stood watching them come, I knew I had made it through the worst. I was alive. I had survived as a participant in what is now one of the most famous invasions in history.

And while I’m thankful I made it, I do not want to forget those who gave their lives doing their duty. It was their bravery and their actions, which made it possible for the rest of us to share their story—our story.

Here is a video of him, too: