You are here: Home / writing / A Time to Forgive ~Flash Fiction

There’s a time for everything under the sun–including a time to forgive. In this flash fiction piece, I explore how forgiveness comes when we share our stories. This Black History Month I feel honored to be a guide sharing a tour of the location of the 1957 riot at Central High School in Little Rock, Arkansas–my home. It is my hope that this speaks to you and gives you insight into the struggles that faced our nation during that turbulent time and how grace might come through facing our past and asking for forgiveness. 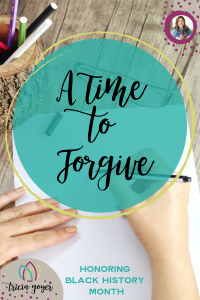 There were nine—the Little Rock Nine. And Linda needed to ask their forgiveness

Linda sat in the passenger’s seat and stared in awe at the buildings passing by the window. Her heartbeat quickened, and her jaw dropped open. “Oh wow! I never thought everything would look the same.”

Her daughter, Tracey, glanced over from the passenger’s seat. “Everything?”

“Well, not everything, but so many of these buildings. They’ve spruced up a bit, but I’d recognize this city anywhere.”

“Yes, that’s why I wanted to stay near the older part of town last night. I remember you saying you lived not far from Main Street.”

Linda sighed. “Yes, too bad our house isn’t there anymore. Although, it wasn’t anything special to look at even then. My dad was a butcher. He brought home the bacon but not much else. Still, we were thankful for what we had.”

Linda’s hands folded on her lap, and she wondered how long they’d be staying in Little Rock. She’d been happy to join her daughter Tracey on the drive from Chicago to her new home in Dallas after a job transfer. Linda had assumed that they’d drive through Oklahoma—that was the shortest route, but she’d been surprised to find herself in the city where she’d spent most of her teen years.

“I know you went to high school there, Mom,” Tracey had explained as she planned the detour. “I thought we could take half a day to drive around your old stomping grounds. You can tell me all the juicy stories.” Tracey had chuckled.

Linda had smiled then, but she couldn’t fake a smile now—no matter how hard she tried. Usually, she was an open book, but not this time. When she’d turned twenty, she’d been happy to leave Little Rock, her high school years, and all the memories. For all her life she’d been known as a good Christian woman, but if anyone knew how she’d acted in 1957, they would have been shocked. She took a deep breath and just hoped that she wouldn’t have to walk through the door to those memories today.

“So, what are we going to do?” Linda asked. “I used to love to go downtown and have a picnic on the river. I imagine that area’s been spruced up.”

Tracey turned onto a road that Linda didn’t remember, called Daisy Bates Drive. “Actually, I was looking online and there’s supposed to be an interesting museum at Central High School. I think there was some type of big issue with desegregation. Didn’t you go to school around here at that time?”

Before Linda knew how to answer, the GPS told them to turn into a parking lot, and immediately she knew where she was. The small museum was across the street from an old Mobile gas station that appeared to have been frozen in time. And across from that, Central High School. A hundred memories came flashing back when Linda spotted it. Some of them were good, but the dark cloud of September 23, 1957, hovered over them all.

“Mom, are you alright. You look like you’ve seen a ghost.”

Tears filled Linda’s eyes. “Tracey, there’s something I need to tell you. Something I haven’t told you before.”

“We’re going to go into this museum, and you’re going to hear about how police escorted nine African-American students to the school—for their first day at Central—and how an angry mob with 1,000 white protesters and the National Guard blocked the way. So much rioting happened that the police had to lead the African-Americans away.”

Images of faces distorted with anger filled her mind’s ear. The roar of hate-filled voices echoed in her memories. 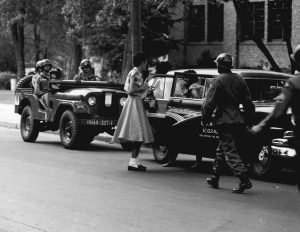 “So you were there, Mom? You remember it?”

Linda reached over and grabbed Tracey’s hand. “Honey, I was one of those protestors. I was only a sophomore myself. And in my mind’s eye, I was screaming more than anyone.”

Tracey’s breath caught in her throat. “Oh, Mom, why didn’t you tell me?”

“Honestly, I was afraid of what you’d think of me.”

“Mom, all of us do things we regret.” She turned in her seat to face Linda. “We can leave. We don’t have to go in.”

“Actually, I think we do. I think we’re here for a reason. God put this on your mind for a purpose. This is a part of my heart I’ve been trying to hide for too long.”

Linda’s knees felt week as she walked through the front door of the museum. They walked side-by-side for a while, looking at the displays. Photos, audio, newsreels, all told the story of racial segregation and the events leading up to the Little Rock School Crisis. 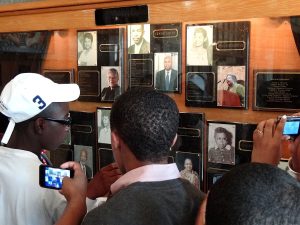 The school crisis started with the 1954 Supreme Court ruling stating that segregated schools were unconstitutional. Linda hadn’t paid much attention to the ruling until the summer before her sophomore year. That’s when she heard that there would be black students coming to her school. Even then, she hadn’t given it any more thought until she got to school. Then the more others talked about it, the angrier she grew. Why couldn’t her state, her school, decide for itself who could and who couldn’t enter their school?

Linda was so lost in her thoughts that she didn’t hear the woman approach, placing a hand on your arm. “Ma’am, we’re going to be giving a tour of the school in five minutes if you’d like to join us.”

Tracey’s eyes were filled with questions. “Yes, of course, but are you sure?”

Linda nodded, and soon she found herself walking through the same front doors she had as a teenager. She listened as the national park’s tour guide told the story, and knots tightened in her stomach.

“Who would do that?” one teenager on the tour commented. “I mean people are people, right?”

And, as they walked to the memorial across the street, Linda knew she had to speak.

“May I say something?” Linda raised her hand. Then standing there, before the small group of people, she told her story. She told about how she’d let others’ hatred pile into her own heart. She shared how much being a follower had caused others pain. Linda swallowed down her emotion as she finished. Then she waited. She expected condemning words, but instead, she noticed compassion in the gazes of those around her.

“No, it wasn’t but I only wish that I could go back. I wish …” She sighed. “I wish I could ask their forgiveness.”

Then, with a knowing smile, the tour guide approached her. “Why don’t you write a letter? I know some of the Little Rock Nine. It’s not a club they ever wanted to be, but they’ve used their platform to impact others in positive ways. I’d be happy to pass it along.”

“Yes, and include your return address. You never know if one of them will return a note.”

Linda nodded and crossed her arms over her chest. Tracey approached a placed an arm around her shoulders. “I’m proud of you, Mom, for sharing your story.”

“Thank you,” she whispered, “for bringing me here. God knew I needed to get this off my chest.” She wiped a stray tear that threatened to break through. “I’m not sure exactly what I’m going to write, but I know the first sentence: Will you forgive me? And just knowing I can have the chance to write those words has lifted a huge boulder of burdens off my heart.”

Our country needs healing. If you want to reach out in grace towards others and want ideas for how to help bridge the race divide in our country then you might want to read these posts as well:

YOU can be the answer to the race problem

How to Bring About Racial Reconciliation- Wisdom and Resources

Join me on a Free Virtual Tour of Little Rock! 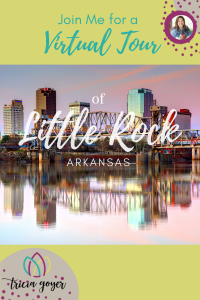 The tour shows Little Rock as being on the pathway for the Trail of Tears. On this trail, the Cherokee, Choctaw, Creek, Chickasaw, and Seminole tribes traveled through the state in the 1830s to new lands in the Indian Territory in modern-day Oklahoma. Visitors will also see a Civil War river crossing location. This tour will take place in Riverside Park, visiting local landmarks and markers. These include an Indian head carving, a Civil War marker, and a historical sculpture garden. We’ll also see the Clinton Presidential Park Bridge, and the tour will end in Downtown Little Rock for a glimpse of the city.
The tour is free and but accepts tips. I hope you’ll join me for this fun and informative tour of Little Rock.

A Time to Forgive was originally published in Mature Living Magazine, September 2017