You are here: Home / adoption / Adoption in Fiction and in Life

When I think about adoption in fiction and in real life, I realize God has been moving through my heart for a long time. Even before I knew it, He was weaving his love for adoption into the stories I wrote. Let me share more about how I came to see His hand on my words. I hope it blesses you! 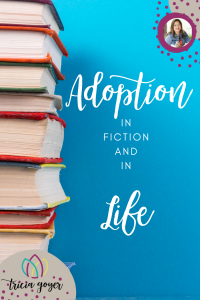 Do you ever look back and can see how God is working and are amazed? Have you ever had a moment when you have an “ah-ha” moment and the only thing you can do is praise God?

I sat down to write about a few of the books that include adoption. I was going to share first about my novel Love Finds You in Lonesome Prairie, Montana and the adoption theme. Its theme is very clear:

(1894) A young woman, Julia, was an orphan and she works in an orphanage in New York. Her life changes when she is asked to take children on the orphan train across the West to take them to their new homes. Her trip goes well until the last stop when she discovers she’s not only there to drop off the orphans, but she has a letter from a stranger stating that she’s going to be his mail order bride!

The theme of adoption is very clear in this book. It’s also very prominent in a few of the others I’ve written: Love Finds You in Glacier Bay, Alaska and The Promise Box.

In both of these novels, the main character is adopted and she must deal with feelings of loss and unworthiness before she can open her heart up to romantic love.

As I tried to consider if any of my other novels have adoption themes, I realized nearly all of them do! Some are novels I wrote YEARS before John and I ever planned to adopt. Realizing that (just this moment!) caused me to see God’s been working on my heart for a while, even though I didn’t realize it.

Some of my other novels that include an element of adoption:

From Dust and Ashes 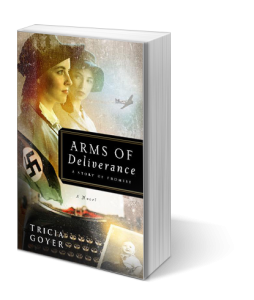 A Christmas Gift for Rose

By the Light of the Silvery Moon

When you think about it, that’s a lot of novels for one author to write about an adoption theme. But it only makes sense, when you look at my home . . . there’s a lot of adopting taking place!

The first Goyer adoption happened with John adopted Cory. When we met in 1989, I was a single mom. So John has been there since Cory was a baby. John adopted him when he was young and we had two biological children after that. For many years I thought we were done adding children to our home.

As our older kids entered their teen years, John and I felt led to adopt. We adopted Alyssa in 2010 as an infant. In January 2013, we welcomed two children from the foster care system into our home. Their adoption was finalized in July of that year. Then, in 2016, we opened our home to four more children (all girls!) from the foster care system. Our home and our hearts are so full.

I honestly believe my heart for adoption began when I started praying, “Lord, show me your heart” and “Lord, give me your heart.” As I prayed He did… 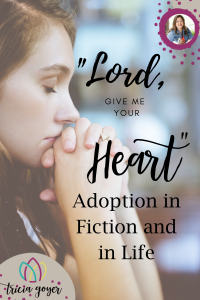 This post was originally posted on inspiredbylifeandfiction.com     and you can read the rest of this post and learn more about what God taught me through adoption there.

Read about @TriciaGoyer’s journey of adoption in life & fiction:

My Big Sky Amish series has the theme of our adoption in Christ’s family. Marianna Sommer comes to understand the true peace of Christ through the struggle of moving from Indiana to living among the Englishers in Montana. Even though she faces trials, she feels the peace of God, like still waters, in her soul.

Right now Beside Still Waters is FREE on eBook and Along Wooded Paths is .99 and Beyond Hope’s Valley is only 1.99. That means the entire series is less than $3.00! I hope you’ll take the opportunity to grab this series. The sale will last from today, December 28th, 2020, through January 2nd, 2021.