You are here: Home / books / Behind the Scenes of the Moms’ Night Out ~ AFTER PARTY!

Ever want to know what happens behind the scenes at a movie premiere? A few days ago I got to experience just that!

If you missed Part 1 of Behind the Scenes of the Moms’ Night Out Premiere, you can read it here.

So how did I get asked to be part of a Hollywood premiere?

In December I was asked to write the novelization of Moms’ Night Out. Here is the book with, like, the best cover ever! —> And take note of my name on the front!

I’ve been eager to tell you about the after party. When I got the invitation and saw that there was going to be one I literally squealed. It seemed so cool and “Hollywood” … something my everyday life is NOT!

Before I go into details, though, I have to tell you that I’m a novelist at heart. My fiction-writing self took it ALL in–the gathering at the Roosevelt, the car ride, the red carpet, the emotions coursing through me at the premiere itself. And I was especially taking notes as the movie ended and the movement to the after party began.

5 Things that Stick in My Thoughts

1. Our “handler” was there, guiding is the right way. I’m so glad there was someone to tell me where to go and what to do!

2. We were given wrist bands to wear. I thought they were for admittance to the after party. NOT! They were admittance into the VIP area.

3. There is a secret passageway between the TCL Theatre and Lucky Strikes bowling alley where the after party was held. It was guarded by men in suits. (I’m NOT making this up!) As I walked those halls I was wondering who else had walked that same secret hallway. My mind was racing at the thought.

4. It’s hard hanging out in a VIP area when you don’t know most of the people. The actors and producers and such knew each other. People often looked at us as if to say, “Who are you?” Everyone got super excited when I talked about the novelization, though, and John and I had some nice conversations.

5. The VIP area was PACKED! And loud. And one could hardly move. It was literally “rubbing elbows” with famous people.

I did have a few favorite people I talked to though.

Favorite Person #1 Manwell Reyes. Manwell plays “tattoo parlor guy” in the movie, and I have to admit he’s one of my favorite characters. Mostly because he is GENIUS. How do I know? I had the script & I watched the movie, and nothing he said/did is in the script. I asked him about it.

Me: I wanted to meet you because what you did on film was amazing. I know what’s in the script, and all that was all YOU.

Manwell: Yeah, they let me just do my thing, man. It was cool. We had a fun time. I’m thankful they let me do that. 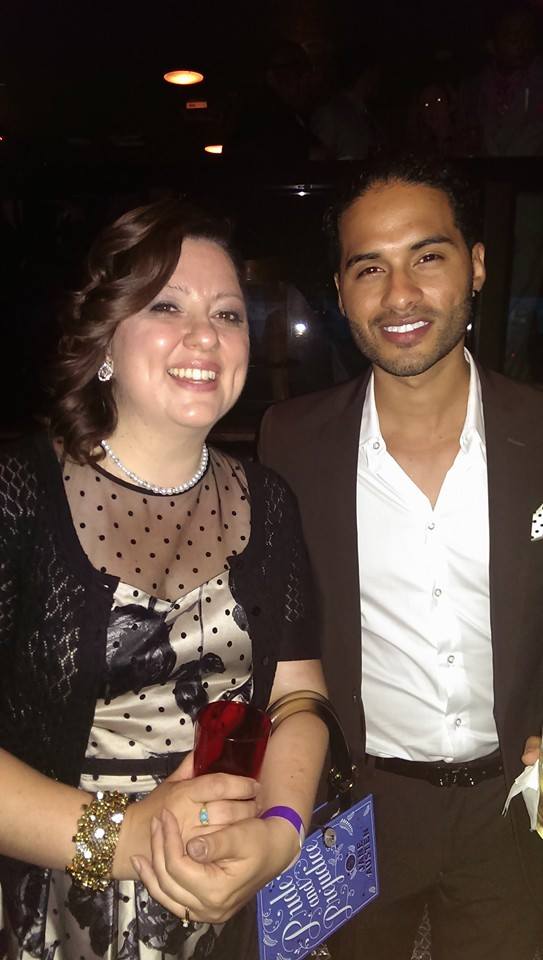 The premiere was the first time Manwell got to see the whole movie, and he loved it! We chatted with Manwell for a while, and later he helped John in the food line as John was trying to balance two plates. And before he left Manwell came over and shook our hands, telling us he enjoyed meeting us. An outstanding guy. And, yes, I did by this Group 1 Crew album.

Manwell is part of Group 1 Crew, and you can read about that here. He’s married to Angelah Johnson who also plays a fantastic part in the movie! Here is Angelah and Manwell on the Red Carpet.

While  standing in line, waiting for my ride to the theater I overheard someone pointing out a a woman who walked by, “That’s Jon and Andy’s mom.” Jon and Andy Erwin are the brothers who directed Moms’ Night Out. Jon also co-write the movie.

The week prior I’d read an interview with Jon and I knew that Sheila Erwin had homeschooled her sons. I made a mental note to introduce myself if I had the chance.

The chance came when I was in the VIP section of the after party.

“From one homeschooling mom to another I just have to tell you how much of an inspiration you are to me,” I said. (Okay, the truth is I’m pretty sure I gushed.)

The Erwin brothers are a perfect example of the type of men we homeschooling mamas want to raise up. Men who will use their talents to impact their world for the glory of God. I’m so thankful that Sheila homeschooled in a time when it wasn’t very popular … which made her one of my favorite people.

Also in the VIP room I had a chance to talk to Mandii Ervin, Andy’s wife. Even before I met her in person I knew I wanted to. Why? Because behind every great man is a great woman. I have no doubt that her influence is in every part of this movie.

I’m bummed that Mandii and I didn’t get a photo together, but isn’t she pretty?

I also had a chance to talk to some of my favorite blogger/author friends … but I’ll save that for the next post!

How about you? Who have you been thankful to meet recently?