You are here: Home / books / Behind the Scenes of the Moms’ Night Out Premiere, Part 3

Ever want to know what happens behind the scenes at a movie premiere? A few days ago I got to experience just that!

If you missed Part 1 of Behind the Scenes of the Moms’ Night Out Premiere, you can read it here.

If you missed Part 2, read it here.

So how did I get asked to be part of a Hollywood premiere?

In December I was asked to write the novelization of Moms’ Night Out. Here is the book with, like, the best cover ever! —> And take note of my name on the front!

John and I have been to the TCL Chinese theater before. We went on vacation in 2009, but never would I have dreamed that five years later I would have been there for a movie premiere.

When we entered we were given tickets to assigned seats and we were ushered to the counter where sodas and popcorn was waiting. “Is this free?” I asked. It was!

We found out seats, and then the stars started trickling in. It’s something crazy when Trace Atkins pauses to have his photo taken three feet away.

I had many friends who were attending, so once we knew where our seats were we went to find them.

This is a photo of my friends Guy and Amber Lia. They have a production company, Storehouse Media, and have optioned many of my books. (ie They are trying to get them made into movies!) Guy, Amber, and I actually had a meeting with Hallmark earlier in the day, but that’s for another blog. 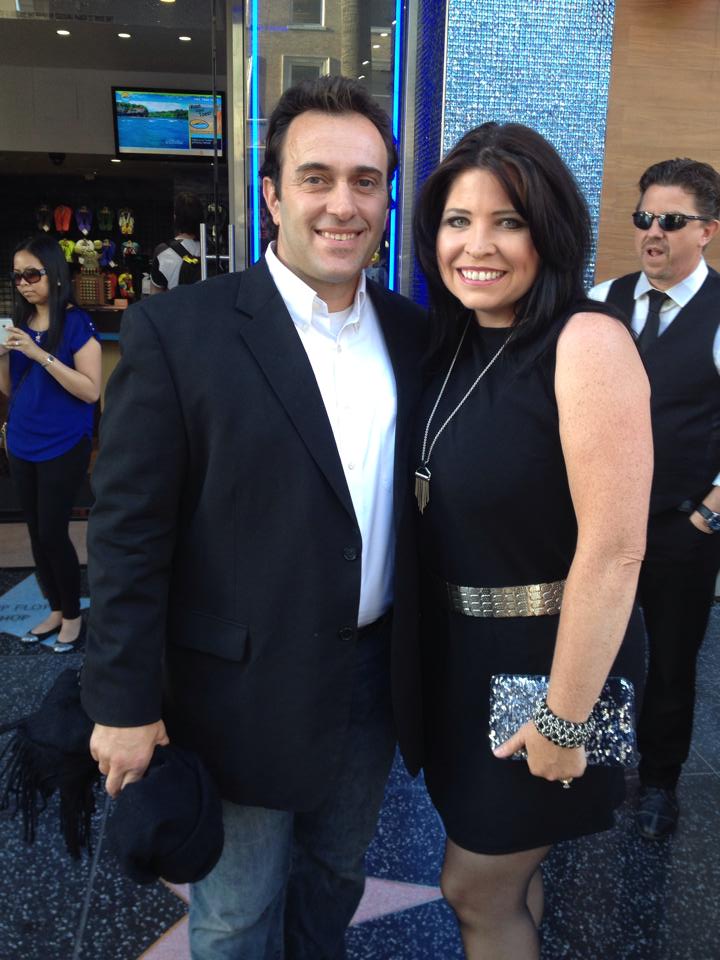 Guy, Amber, and I also connected with Logan Wolfram and Sarah Mae! Here we are chatting. (Girls, we totally should have posed!)

This is what it looked like inside the theater. If you follow that walkway around then John and I were sitting in the first, far row next to the stairs.

After a while the empty seat next to me was filled. By him:

Harry Shum Jr. plays Joey in Moms’ Night Out. I love his character! Here he is performing on Glee!

But I didn’t get to chat with Harry long. He and his fiance were taken to new seats. Hmm, who is going to really sit there? Two sodas and a popcorn were put there, and we were told, “Don’t let anyone sit there.”

I knew it had to be a special guest. It was! It was this guy: Alex Kendrick and his lovely daughter!

We only had 30 seconds to chat with Alex before the movie started, but he was kind and genuine. Just as I expected him to be.

I have to admit I was nervous sitting next to him during the movie … a real star! 🙂 But it was a blast watching the movie with all those who’ve invested so much in it. I felt so honored to be part of that group of talented, godly people.

It was also awesome to see the movie in its final, edited version. I’d spent a lot of time watching an earlier copy, and the final version looks amazing!

As the movie ended, I got a nervous feeling in my stomach, and I wondered if my name was going to be on the screen in the credits. It was!! I was so excited that I forgot to take a photo, but watch for it!

Overall, I’d say being part of that premiere is one of the highlights of my career. The people who worked on this project love God and have a passion for family-friendly media. Their hearts really shine. I’m praying even more that this movie will be a success so that others like it will be able to follow!

As a bonus, here’s a short video clip from the Premiere!

What about you? Who would you want to sit next to at a movie?