You are here: Home / being an author / My Writing Desk | Billy Coffey (Plus a Giveaway) 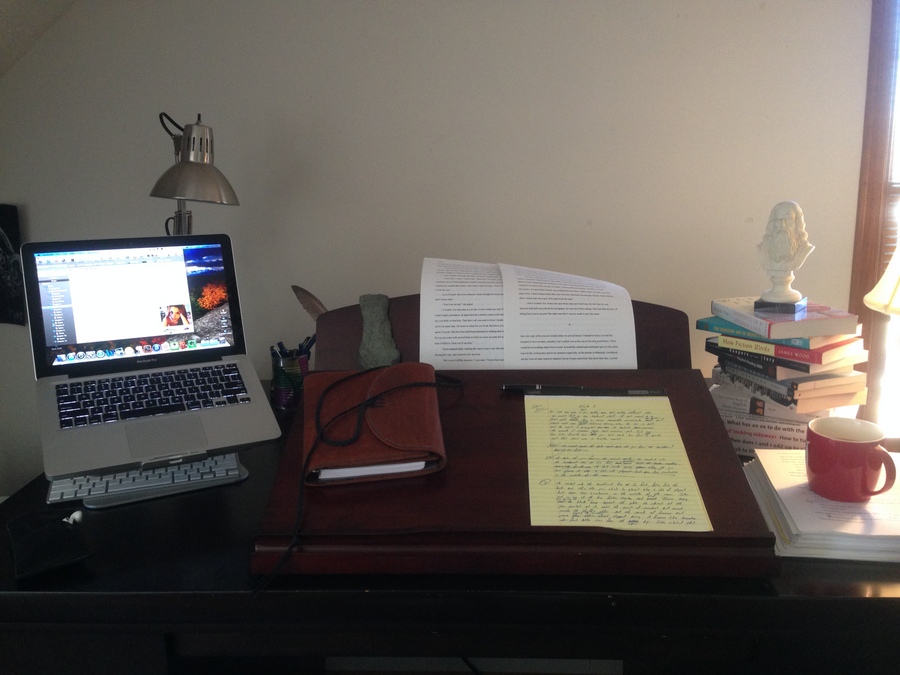 Oddly enough, I like a messy desk. I am tempted to write this off as pure laziness, but I’d rather lie and profess clutter to be the seed of creativity. It sounds better that way.

Though there is admittedly a lot of “stuff” atop and around my desk, some things are more important than others. To me, the most important thing in this picture is the blank wall. I’ve tried many things on that wall over the years. It was once a place to hang my children’s artwork. It was a place to brainstorm after that. I had so many pictures, notecards, and colored string on that wall that my wife began referring to my office as “the conspiracy room.” Now, it’s just blank. No distractions. Unless, of course, my eyes wander to the window.

The desk itself is the stand-up variety, bought not so much out of a desire to be physically fit as out of a belief that I think better while on my feet. I bought the editor’s desk on top years ago, and it remains one of the best purchases I’ve ever made. I don’t know what it is about writing on a slanted surface. I’m sure there’s some scientific article somewhere that explains how and why it lends itself to productivity. You’ll just have to take my word. Try it. You’ll thank me.

Neither of those desks are important, though. Nor the notebook, nor the computer (though the program running on that computer is Scrivener, which is very nearly important because I think it’s the greatest writing software ever), nor the stack of to-be-read books or the bust of da Vinci. The cup of coffee? Yes. A must. But not even that so much as the pen and paper.

I’m a big believer in writing longhand. It forces you to slow down and let go at the same time, and there’s a connection between you and the story (and therefore you and the reader) that I can’t seem to duplicate with a keyboard. For me, it’s a Waterman fountain pen and a yellow legal pad. Don’t skimp on the pen, but feel free to hoard cheap paper. Cheap paper allows you the freedom to get sloppy, to take risks, to make mistakes. That’s the key to a good first draft. Longhand, then a first edit as I type it into the computer, then a second edit in longhand again. That’s my process.

One more important thing. The stone on the ledge beside the printed-out papers is a tomahawk head, dug up in a cornfield just down the road. There’s no telling how old it is. A professor told me its age could well be measured in millennia. I keep it handy and often hold it when I get stuck in a particular scene or with a certain character, running my fingers over the edges, wondering whose it was and what that person was like and what happened to him or her. It’s a reminder that none of us are as separated from one another as we might think. No matter who we are or when we were, we all ask the same questions and wonder the same things. We’re all seeking something more

Get a sneak peek at where @BillyCoffey’s novels take shape (cc @TriciaGoyer):

Billy Coffey’s critically-acclaimed books combine rural Southern charm with a vision far beyond the ordinary. He is a regular contributor to several publications, where he writes about faith and life. Billy lives with his wife and two children in Virginia’s Blue Ridge Mountains. Find out more about Billy at his website.

About The Devil Walks in Mattingly and a Giveaway

It has been twenty years since Philip McBride’s body was found along the riverbank in the dark woods known as Happy Hollow. His death was ruled a suicide. But three people have carried the truth ever since—Philip didn’t kill himself that day. He was murdered.

Each of the three have wilted in the shadow of their sins. Jake Barnett is Mattingly’s sheriff, where he spends his days polishing the fragile shell of the man he pretends to be. His wife, Kate, has convinced herself the good she does for the poor will someday wash the blood from her hands. And high in the mountains, Taylor Hathcock lives in seclusion and fear, fueled by madness and hatred.

Yet what cannot be laid to rest is bound to rise again. Philip McBride has haunted Jake’s dreams for weeks, warning that he is coming back for them all. When Taylor finds mysterious footprints leading from the Hollow, he believes his redemption has come. His actions will plunge the quiet town of Mattingly into darkness. These three will be drawn together for a final confrontation between life and death . . . Between truth and lies. Purchase a copy and learn more at Billy’s website!

To celebrate the release of The Devil Walks in Mattingly, Billy is holding a giveaway where you can enter to win a Kindle Fire! Details and entry forms are here.

PLUS you can enter to win a copy of The Devil Walks in Mattingly below! Only those in the U.S. are eligible to win.