You are here: Home / Books / An Amish Garden 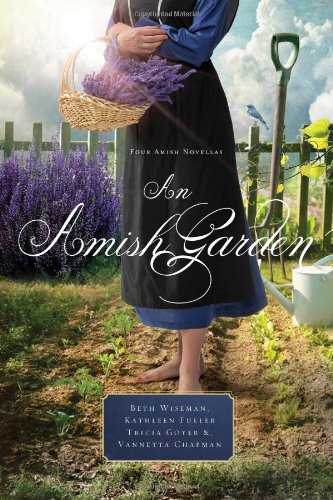 An Amish Garden is a perfect selection of stories that will lift your heart, inspire your faith, and encourage your green thumb...

“Where Healing Blooms” by Vannetta Chapman

When Widow Emma Hochstetter discovers a run-away teenager in her barn, and the bishop asks her to provide a haven for a local woman and her two children she finds her quiet life has been interrupted. Then, her mother-in-law, Mary Ann,reveals one of her garden’s hidden secrets, something very unexpected. Will she continue alone or will she accept the gifts God has given her?

“Flowers for Rachael” by Kathleen Fuller

Rachael Bontrager’s flower garden is beautiful, but at twenty-four, she’s lonely. Gideon Beiler fell in love with Rachael almost at first sight. After her grandfather has a stroke, her days are filled with caring for him, and one day Rachael finds her garden in shambles.However, she won’t accept Gideon’s offers of help. Will she realize she doesn’t have to do everything on her own and that God is in control?

“Seeds of Love” by Tricia Goyer

SadieChupp finds her greatest joy in the greenhouses in her Montana community. Acompany is interested in buying her heirloom seeds, but they are the only thingshe has left from her deceased parents.Eli Plank is a traveling bachelor who believes he can help Sadie, but amisunderstanding leaves her heartbroken. Will she trust him again, and let theseeds of a new relationship take root?

“Rooted in Love” by Beth Wiseman

Rosemary Lantz isdoing her best to run her family’s household. She excels at all her tasksexcept one: gardening. Saul Petersheim has pursued Rosemary for years, butRosemary keeps turning him down. What Saul doesn’t know is that she hasgood reason—something no one can know—especially not him.

About the Author
Tricia Goyer

Tricia Goyer writes out of her passion for God and her love for family and others. The author of more than 70 books, she writes both historical fiction and nonfiction related to family and parenting.

This USA-Today Best-selling Author has also won a two Carol Awards and a Retailer’s Best Award. She was also an ECPA Gold-Medallion Nominee and a Christy Award Nominee and won Writer of the Year from the Mt. Hermon Christian Writers Conference.

Tricia is a popular conference speaker. She has spoken at events such as MomCon, Raising Generations, and Teach Them Diligently conferences and been interviewed by numerous national TV and radio programs and magazines. Her new podcast, Walk It Out, can be found on iTunes or downloaded on any podcasting app. Whether through writing, blogging, speaking or podcast, Tricia loves sharing messages of inspiration and hope.

A homeschooling mom of ten, including seven by adoption, Tricia is also a grandmother of four and wife to John. With a busy life, she understands the importance of making every word count.