You are here: Home / Community / Behind the Scenes of Dancing With the Stars

If you follow me on Facebook and Twitter you know that Monday nights are my night for hanging out with my Grandma and live tweeting Dancing with the Stars.

So Monday nights I’m usually sitting on my grandma’s bed, watching her small TV. Last night I was wearing this:

And I was doing this:

Can you see John and me? We’re in the top right. That’s me with the white sweater, my arms raised! Thank you, Darlene, at Time Warp Wife for capturing that shot! 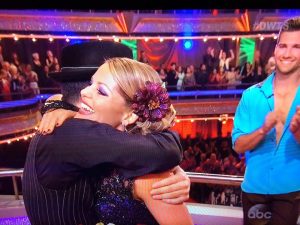 My impressions from the inside:

1: The studio is smaller than you think. They do lots of sweeping shots to make it seem bigger.

2. The dance pros and stars are exactly the same when the camera is off as it is when it is on. Maks is still a ham. Val is quieter. Derek practices every spare moment.

3. Candace did awesome!! I was so proud of her. She seemed really focused and peaceful. I was praying for her in the room.

4. People are just people. There were a lot of faces of “stars” in the room. There were many people I knew the name of. (Juan Pablo and Mrs. Brady!) and there were a lot more people who I recognized from television or movies but didn’t know their names. But from the balcony they were just little blurs and we were all there for the same reason. To watch some good dancing and have fun. Well, sort of … which leads to #5.

5. I think the people in the balcony had WAY more fun than the people in the floor level seats. We were cheering. We were dancing. I was pumping my arms in the air. It would be hard to always have to be “on.” To know that everyone is watching you. To be “known.” I liked just being one of the silly fans.

Go behind the scenes of #DWTS with @TriciaGoyer!

6. Some stars behave badly. There was one female actor (not one of the dancers) who was ranting in her cell phone when we were exiting the building. She was upset because her “publicity” there wasn’t handled well. It gave me a bad opinion of her and I’d guess those things are pretty common in Hollywood.

7. True behind the scenes stuff: DWTS planners are VERY organized. We had clear directions where to go, what to do, and where to sit. Our names were on the seats when we got there. The crew was amazing. They really seemed to work together well. There was an “entertainer” during commercial breaks who interacted with the crowd and kept the energy up. They encouraged us to call out stars names, cheer, boo, etc. It truly felt like we were part of the production.

8. I’d totally do it again! Afterward John and I went to the Cheesecake Factory, too, and I told him as we left, “That was the best date night ever!” Thank you Guy and Amber Lia at Storehouse Media for making that possible. Love you guys!

I have a few books on sale right now! The Swiss Courier and Chasing Mona Lisa are only $1.99! And Generation NeXt Marriage is $2.99. You can also get my four World War II novels in the Liberators Series for $13.99.