You are here: Home / books / Don’t Give Up When Life Hurts ~ Suicide Awareness 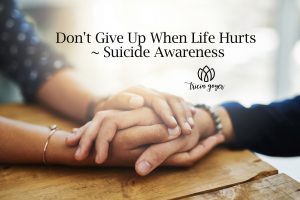 In honor of World Suicide Awareness Day I wanted to share this story of hope with you. Suicide is a sensitive subject, I know. But with open dialog and continued awareness, we may someday end this epidemic.

Kristen Anderson thought she had the picture-perfect life until strokes of gray dimmed her outlook on life. Once a happy child, Kristen’s world darkened after three friends and her grandmother died within two years. Still reeling from these losses, she was raped by a friend she thought she could trust. She soon spiraled into a depression that didn’t seem to have an end. Then, on a cold January night at the age of 17, Kristen attempted suicide by laying down on a set of railroad tracks near her parents’ home. She was run over by 33 freight train cars at 50 mph, and both of her legs were severed, but miraculously, she survived!

Kristen and I wrote her book Life, In Spite of Me a few years ago, and God has done some wonderful things in her life! She’s gotten married and has three beautiful children and one on the way. God continues to redeem her life. <click to tweet> 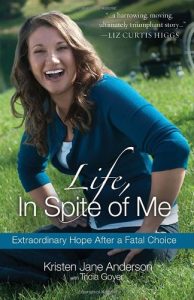 When I thought about writing the book, I knew that if people would see how Kristen’s life did not remain in that dark place, they could have hope for their own journeys. My intentions were to help people “out there.” I had no idea that it would open up conversations within my own family.

When I first started working with Kristen on the book, I was intrigued. I’d seen Kristen on Oprah and I knew people were amazed by how she survived. I was amazed too. There were numerous times in the interviewing process that I thought, “This is a miracle.”

As with all books, I often share what I’m writing with my family. I remember one afternoon when I was driving and my sixteen-year-old daughter Leslie was with me. I was talking about Kristen and Leslie looked at me, sadness in her eyes. “Mom, I have to tell you, I’ve considered suicide before.”

I felt my breath escape me.

Tears sprang to my eyes. “What? When?”

Leslie went on to tell me it was when she was in junior high. She didn’t have many friends and felt shunned at church. Worse than that, the girl she considered her best friend teased her all the time, telling her she wasn’t pretty, wasn’t smart, and would never have a boyfriend. “I was so sad inside. I didn’t want to face that sadness anymore, but I didn’t take my life because I knew how much it would hurt you and dad.”

Over the next couple of days, Leslie and I continued to talk about how hard life seems sometimes.

We also talked about how easy it is to pretend everything’s fine when we’re really hurting inside.

It made me realize that as a mom there could be things my kids are struggling with that I have no clue about. How about you? Are there things you’re struggling with that your parents don’t know? I know it’s hard to share sometimes … but maybe you should tell them. It might be hard, but parents want to be there to help. They care.

When I talked with Kristen’s mom, Jan, during the process of writing the book, she told me she’d been worried about Kristen’s friends at the time, but not about her daughter.

“Kristen was the one everyone turned to for help. She seemed to be having a hard time, but I had no idea how bad it had gotten.”

I have to admit that when I was a teenager suicide crossed my mind, too, but I never took it seriously. While I was in high school, though, a friend of a friend did commit suicide after his girlfriend broke up with him. I remember how the whole community was saddened by this. We all wondered if there was more that we could have done to help him.

Maybe you’re wondering, how would I know if someone I love is considering suicide?

The best way is to keep the doors of communication open. If you see concerning signs in your loved one’s behavior don’t assume everything is ok. ASK THEM. Be open to hearing potentially upsetting comments and admissions from your children or spouse. Promise them–and yourself–right now–that you will listen without judgment and that you will take their feelings seriously.

Often just having someone to confide in and share our concerns with can help us work through feelings of grief or uncertainty. But sometimes, we need more. Don’t be afraid to ask for help and to help your child or husband find a good counselor who can help them work through the emotions and situations that are making them feel that suicide might be a solution.

Above all, don’t give up. Keep engaging with the one who is hurting. Give them extra time and love. Help them see the beauty and joy in every day and let them know that you are there for them–no matter what.

Here are some suicide warning signs:

You can connect with Kristen and her ministry, Reaching You, on Facebook! Below is a preview of the book so you can get started reading for free.

Interested in some similar posts to this one? Check out these: