You are here: Home / faith / The Gas Pedal Test

This post is part of the Blue Bike Blog Tour, which I’m thrilled to be part of. To learn more and join us, head here. Be sure to stick around until the end of my post to learn more about this amazing book!

Real life for me always means making minor adjustments. Sometimes they are adjustments we think about with great diligence. Other times they happen slowly, and we hardly notice them.

It reminds me of the conversation I had with my then-thirteen-year-old son, Nathan. I was driving down the road, and he started asking me about the foot pedals. He wanted to know about the one on the far right, and I told him that it wasn’t really a pedal, just a pad for resting my left foot, while the right one does all the work.

Then he asked if it was hard to adjust my speed.

“No, I’ve been driving for nearly twenty years . . . and I suppose it’s natural now. I do it without thinking. I think ‘slower’ or ‘faster’ as I read speed limit signs or take in the road conditions, but then my foot works without me really thinking about it.”

Take a good look at your life. Does it need to slow down or speed up? @TriciaGoyer

Then, I told him about the brake pedal. It works the same way; I’m used to the right amount of pressure to slow me down and bring my vehicle to a stop.

Aren’t we the same way in life? We read the signs, take in the conditions, and speed up or slow down. For example, if I notice one of my kids seems “disconnected,” I may suggest a lunch date. Or if an editor approaches me with a project, I may “speed up” my writing goals to fit it in. It’s part of our lives we don’t think about much often. 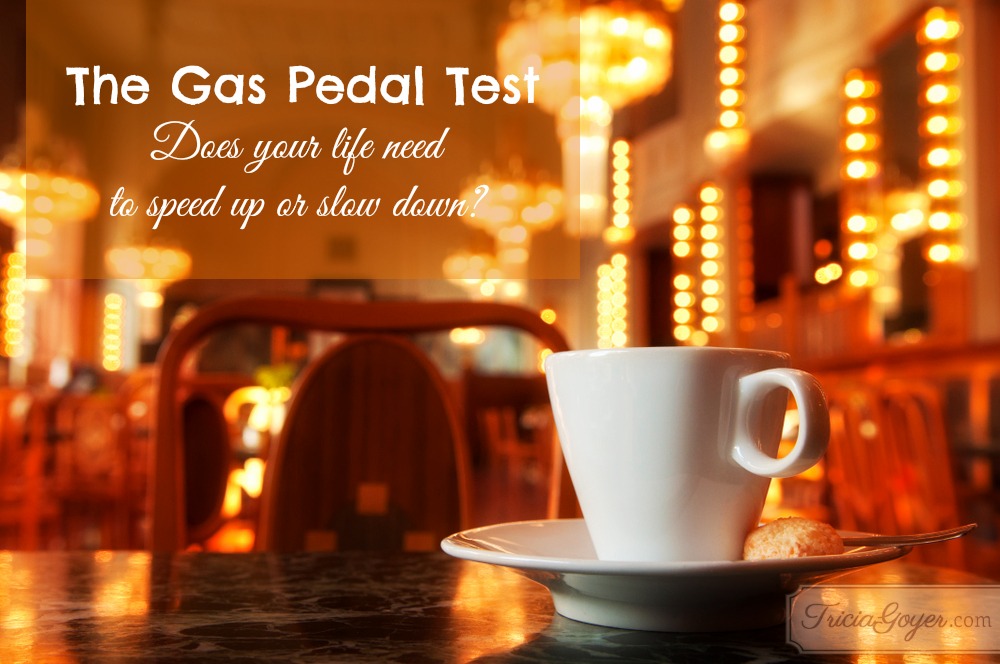 Life, it seems, isn’t as easy to control as a gas pedal on a car.

Life, it seems, isn’t as easy to control as a gas pedal on a car. @TriciaGoyer

I was thinking about all of this when I came upon two short verses in Acts: “Then [Paul] began preaching daily at the lecture hall of Tyrannus. This went on for the next two years, so that people throughout the province of Asia–both Jews and Greeks–heard the Lord’s message.” (Acts 19:9-10)

For two years, Paul preached DAILY. That must have been a big challenge. Did he come up with a new sermon every night? Did he feel stuck, wishing he could move to another place and wishing the people’s acceptance would “speed up” so he could move on?

I’m sure that both things could have occurred. Paul was human, after all. What we do know is that people throughout the province of Asia heard the Lord’s message.

So, today, what is God speaking to you? Keep the pedal study? Slow down? Speed up? Break? As you seek Him, I trust that You will know. And the more minor adjustments you make, heeding His voice and adjusting the gas pedal, the easier it becomes.

About Notes from a Blue Bike

Notes From a Blue Bike is written by Tsh Oxenreider, founder and main voice of The Art of Simple. It doesn’t always feel like it, but we DO have the freedom to creatively change the everyday little things in our lives so that our path better aligns with our values and passions. Grab your copy here.