You are here: Home / About Me / God is Good, In Spite of My Procrastination 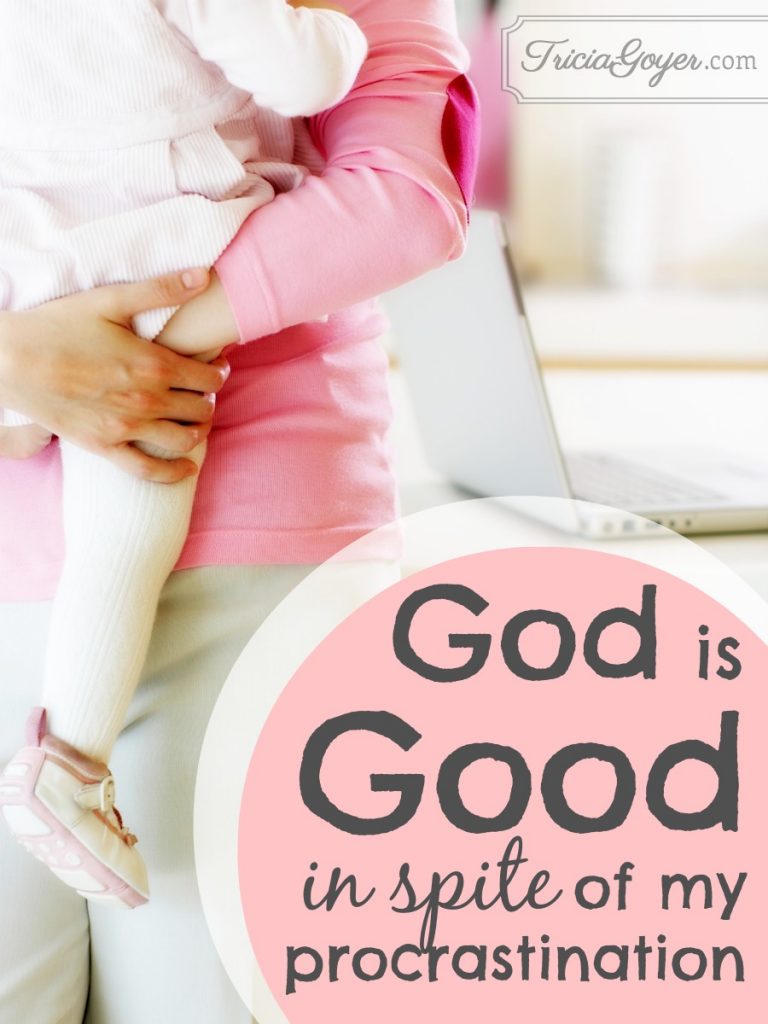 If you could see my desk you would chuckle.

Okay, maybe not. Perhaps you would have pity on me, volunteer your time and set to work on my massive to-do list. (Any takers? eh? eh?)

If you could see my desk you would chuckle. Okay, maybe not. @TriciaGoyer

Seriously, I have stacks of bills to pay, letters to answer, books to mail out, and a checkbook to balance. That’s not including the research books for my work-in-progress, and my non-fiction manuscript galley that I need to read through.

Usually, I can keep the balls up in the air. The bills are rarely late. The checkbook evidentially gets balanced. I get my kids to the right camp, on the right day. (If you don’t know what I’m talking about, you HAVE TO read Susie Warren’s story on www.faithchicks.com)

And somehow, with God’s grace, my writing assignments are turned in on time. But it’s the things like mailing books out that end up taking longer than they should.

This is NOT a good thing.

Not only do I want my readers to like me, but sometimes they might not live long enough to see the autographed front cover.

Let me explain… Two years ago I received the first copies of Night Song in the mail. One thing I do is send free books to everyone who helped on the project–especially to the veterans I interview.

Well, one of the men I interviewed was a medic. He gave me some great information for my character, Nick. (Would you believe I had to go look his name up! I have too many hunky heroes in my head!)

Anyway, I emailed Earl to let him know the book would be in the mail. He said he was down with a broken hip, but he was looking forward to getting the book. A few days passed (I was under deadline for another project). Then a week. Then two. Finally, I got the book in the mail. THAT THE SAME DAY I got a note from Earl’s son telling me he’d passed away. I felt HORRIBLE! I mean, I was literally sick to my stomach. Earl had helped me so much. He had been SO excited to have an autographed copy from me. And I couldn’t get my act together enough to mail a silly book.

I sent a sympathy card to Earl’s family and a letter. I apologized to them for not sending the book sooner. A week later I received an email from his daughter.

“Oh honey,” she said. “Don’t worry about not sending the book. My dad got tired of waiting and had me buy a copy for him. He read it right before he passed away and loved it. He was so excited. He showed everyone.”

I was SO thankful. Even though I didn’t have my act together, Someone did!

Isn’t God good?! In spite of my procrastination. @TriciaGoyer

As an added bonus, through the communication with Earl’s kids I discovered he never shared much about his experiences during WWII. (This is common with many veterans.)

After his death, I was able to forward the emails and stories he’d sent me, and because of that they were able to discover part of their father’s past they’d never known.

Isn’t God good? In spite of my procrastination.

God, give me the eyes to see your goodness. Give me the heart to love myself and others in spite of our flaws and “inadequacies.” Allow me to catch a peek at the mystery of your ways.