You are here: Home / family / How to Serve Your Spouse 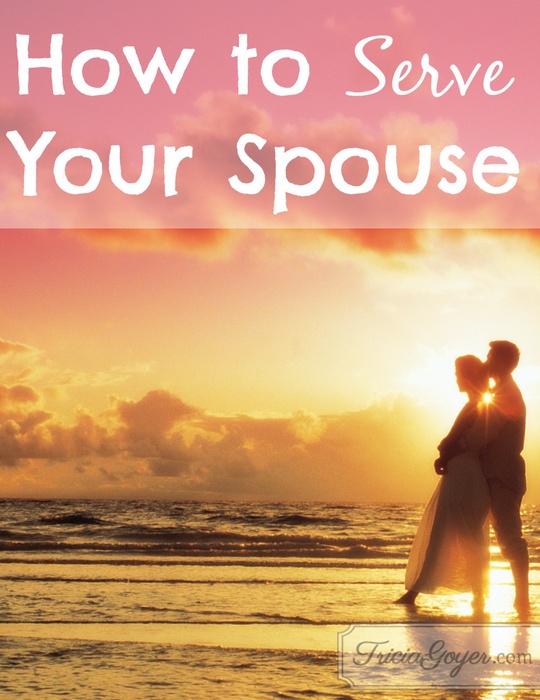 How to Serve Your Spouse

Marriage isn’t all about romance or heart connections. (Don’t we wish!) The everyday stuff of life includes housework, yard work, and more. Much more.

I’ll never forget the look on my new husband’s face as he took a bite of the stew I’d had simmering in the crockpot all day. We’d only been married a few weeks, and I’d decided to embrace the role of domestic goddess. I knew I was no June Cleaver, or even Alice from the Brady Bunch. Still, wanting to do this marriage thing right, I’d purchased a cookbook and set to work.

John took a big bite of beef stew, chewed slowly, then swallowed. “Uh honey, was that a grape?”

“A grape?” I scooted my spoon around in the bowl, my smile fading. Sure enough, the raisins (which the recipe had called for, by the way) had swelled into large, fat grapes. Not only that, the grapes had given the whole pot a “fruity” flavor. Even after we picked them out we deemed the meal inedible.

My new husband was kind as I blubbered on about having never made stew before. In fact, as he soon found out, I’d never made much of anything. Growing up in the recession of the 80s, both my parents worked. Dinner often consisted of TV dinners or Banquet fried chicken from a box. When my mom did cook from scratch, I was usually at cheerleading practice or studying for a test. Besides, it was easier for Mom to just do it herself than to show me how.

After that “raisin stew” dinner (and a dozen similar ones to follow) my enthusiasm waned. How in the world could I get the hang of this domestic thing? Where was Caroline Ingalls when I need her? Ma, help!

A hundred years ago women lived among a community where young girls were trained on the finer ways of caring for a home. For the most part, when a new bride stepped into her role as wife she was prepared for her domestic roles—namely sewing, cleaning and, yes, cooking.

I entered my marriage with good intentions and very little skill. Still, my efforts weren’t hindered. I was a smart girl. I was on the Dean’s List in college for heaven’s sake. How hard could it be?

Did you enter into #marriage with false expectations? Don’t worry; so did @TriciaGoyer!

I soon learned to cook and clean. But . . . that didn’t mean I liked it. Remember those expectations I talked about in the first chapter? I wanted John to do MORE around the house . . . anything would help.

I tried complaining. I tried nagging. I was a wonderful martyr.

Then I decided to pray about it.

Amazingly, instead of zapping my husband, God took me back to my unfulfilled expectations. In His gentle way, God asked me to look at my heart. He also reminded me of John 13:3-5 and 14-16 where Jesus wrapped a towel around his waist and washed His disciple’s feet.

Jesus knew that the Father had put all things under his power, and that he had come from God and was returning to God; so he got up from the meal, took off his outer clothing, and wrapped a towel around his waist. After that, he poured water into a basin and began to wash his disciples’ feet, drying them with the towel that was wrapped around him . . .

“Now that I, your Lord and Teacher, have washed your feet, you also should wash one another’s feet. I have set you an example that you should do as I have done for you. I tell you the truth, no servant is greater than his master, nor is a messenger greater than the one who sent him. Now that you know these things, you will be blessed if you do them.”(NIV)

Jesus didn’t serve because he was inferior. He served out of power. Out of love.

“We can all see God in exceptional things, but it requires the growth of spiritual discipline to see God in every detail,” says Oswald Chambers. “Never believe that the so-called random events of life are anything less than God’s appointed order. Be ready to discover his divine designs anywhere and everywhere.”

Really? Could God’s divine designs be found in the ordinary stuff of life too?

There are two ways we can approach the dirty laundry—with resentment and competition (I do more than he/she does . . .) or with a heart of service and love, as Jesus showed us. The latter is the better choice, of course.

What area is it difficult for you to serve your spouse?

What area is it difficult for you to serve your spouse? Share with @TriciaGoyer:

Steps You Can Take

Thank you for my spouse and for our marriage. I know I take things for granted and have wrong expectations; help those to change and help me to take on a servant’s heart.

Generation NeXt Marriage
The 10 Commandments of Marriage
Desperate Marriages: Moving Toward Hope and Healing in Your Relationship