You are here: Home / amish / Just for You—An Excerpt of ‘The Kissing Bridge’ 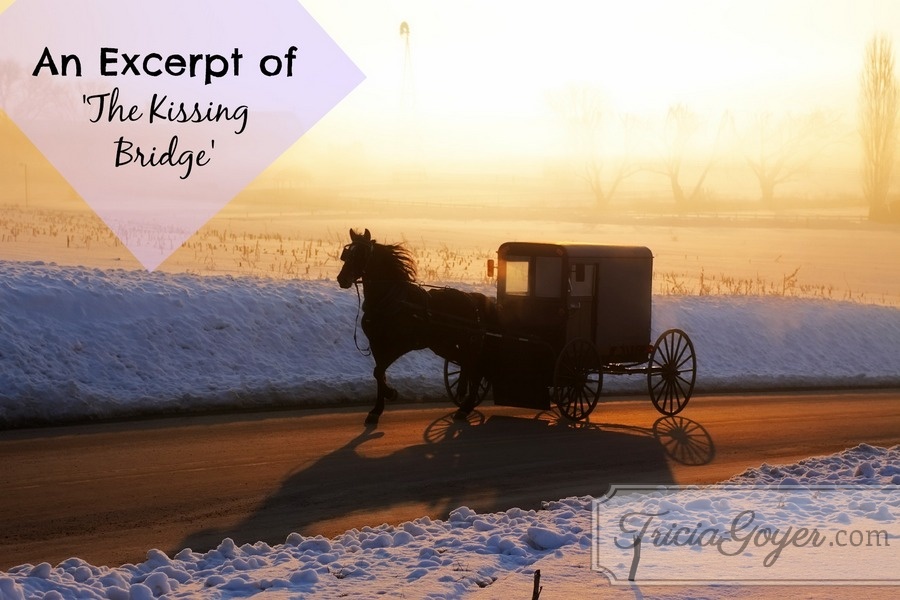 An Excerpt of ‘The Kissing Bridge’

*This post is part of my Beautiful Bridges and Special Kisses Giveaway! Want to link up, or looking for more info on the chance to win a collection of TEN Amish novels? Click here. You can also download your own first chapter by signing up HERE.

Her bruder’s soft whimper just outside the bedroom door alerted Rebecca Troyer to Claude’s injury. She threw the door open to find Claude standing there with tousled hair, flecks of straw from head to toe, and a rumpled shirt. Tears made clean trails down dirty cheeks. He held up his finger to show blood seeping from a small gash.

Rebecca stepped out into the hallway onto the whitewashed wooden floor. “Whatcha do this time?” She knelt beside her seven-year-old bruder and sighed. He’d not only cut himself, he’d also torn the sleeve of the new shirt Mem had just sewn for him. Mending that would be more work for Mem, especially since Rebecca was leaving today. Guilt piled upon her shoulders as an invisible weight.

“I was trying to get the mama cat.” Claude’s large brown eyes fixed on hers. “Her kittens were crying, and she needed to feed them. The mama was up in the loft.”

Compassion welled up, and Rebecca opened her arms. Claude stepped into them. She squeezed, breathing in the scent of boyish sweat and barn, and tears rimmed the edges of her eyelids.

Her lips parted slightly, but no words emerged. I’m going to miss you, Claude.

She wished she could speak those words and tell him she’d be back someday. Back with a degree—with knowledge—and their whole community the better for it.

Claude whimpered and pulled back slightly, and she squeezed his shoulders tighter, knowing it was one of the last hugs she’d be giving him for a while.

She released him, pushing him back to where she could get a good look at him. Her gaze narrowed. Her brow folded with sternness. “You didn’t get up on that rickety ladder again, did ya?”

Claude’s bottom lip puckered and trembled. “Ja, but the kittens’ cries were so loud . . . they needed their mama.”

Did the kittens’ cries make him think of his own loss?

Claude had lost a mother. She’d lost a sister. Her mother had lost her older daughter and had gained a baby to care for. All on the same day. And not many months later, when Claude’s young father admitted he couldn’t raise the child alone, Rebecca’s par- ents adopted their grandson, making him their son.

The day of her sister’s death had also started Rebecca on her path to leaving the Amish. Not even her parents knew she was going. If they did, there was no way they’d let her go. And so she’d been lying to them for years, talking about Amish boys in the community who’d caught her fancy and about getting baptized next fall, all the while figuring out how to escape.

The ache she carried inside from longing for her sister— Claude’s mother—urged her on.

“That ol’ barn cat won’t let her kittens go hungry. You don’t need to worry about that.” She stood straighter, forcing stern- ness. “You need to obey Dat. Listen to him. He’s jest watchin’ out for your safety. Disobedience will only hurt you, ya hear?” She straightened her shoulders and fingered the string of her kapp. “Now go find Mem and ask her for a bandage.”

“Ja, when I’m here. But what do you do when I’m at work? You know I’m not always going to be here, don’t ya?” Moistness filled her eyes again, but she quickly blinked it away. “I can hear Mem downstairs getting the last of things together for Aenti’s birthday party. Go on now.”

Claude held his finger closer to her, forcing her to look at the drops of blood. Rebecca took in a deep breath and jutted out her chin. “Mem will help you. I have to go to work, ja?”

An ache radiated from her stomach. How can I go through with this?

With a whimper, Claude turned and scurried back down- stairs. Rebecca urged herself to stay strong—to stick to the plan.

Her hand trembled as she picked up a small hand mirror. She checked her hair and her kapp, then returned the mirror to the dresser top and grabbed her purse. Her suitcase was already in the trunk of Lora’s car. Lora had worked at the Garden Gate Cafe with Rebecca until she realized she could make three times as much money driving the Amish. The fun- niest part of Lora’s new job was that no one realized her father used to be Amish, or knew Lora could understand everything they said in Pennsylvania Dutch.

Rebecca grimaced. No doubt by tomorrow everyone in
Shipshewana would be talking about her leaving. These things didn’t take long to get around.

A truck door slammed, the noise coming from the gravel driveway outside. The sound of her older bruder getting dropped off from his factory job told Rebecca she only had a few minutes to make it outside to the road before Lora arrived. She grabbed her sweater from the hook on the wall and hurried down the hallway, nearly jogging down the stairs to the first floor. In the kitchen, Mem bandaged Claude’s finger. Rebecca wished she could walk over and give her mother a solid hug like she used to do as a child, but Mem would then know for certain that something was wrong. Instead Rebecca offered them a quick wave.

Rebecca turned, clutching her purse to her chest. “Ja, Lora should be here any moment.”

Mem’s eyebrows folded. “But I thought Wednesdays were your day off.” She set the box of bandages on the table and took a step in Rebecca’s direction. Claude whimpered but didn’t say a word.

Mem’s gaze fixed on her. “Is everything all right? You haven’t been yourself lately.”

“Ja, I’m fine. Everything’s fine.” She wanted to tell her mem that she hadn’t been herself since Claude’s birth—since her sister’s death—but Rebecca held her tongue. The matter was in God’s hands. Rebecca just wished her pain and missin’ were in His hands too.

“Will you be home late?” Mem hurriedly asked. “We will miss you at the party. Didn’t you have to work last year on your aunt’s birthday too?”

“I, uh, can’t remember, but I’ll be home at the regular time. Don’t wait up for me.” And don’t feel as if any of this was your fault, she wanted to add. The letter she’d left, tucked into the top of her trunk, would explain everything.

Rebecca hurried out the front door before she changed her mind. Her eyes scanned the roadway, and she spotted Lora’s white Buick approaching. Afternoon light glimmered off the freshly washed car, and Rebecca’s heart sank. Lora only washed the car when she had a full day of taxiing. Even though the Amish didn’t believe in being prideful, for some reason those in the community always called drivers with the nicest, cleanest cars first.

Rebecca’s light-gray sweater hung over her arm, and her simple purse dangled from her shoulder. The autumn day was warm, but she refused to enjoy it. Refused to take one last look back at her parents’ farm.

She half walked and half jogged toward the road as Lora slowed the car and pulled in the driveway. Rebecca hid her disappointment to see Fannie Petershwim sitting in the front seat, with her daughter Karen sitting in the backseat. Rebecca glared at Lora through the side window, and Lora offered the slightest of shrugs, as if to say, “A paying job is a paying job.”

Lora hadn’t asked for money for all the rides she’d given Rebecca over the years. Rebecca had no right to complain. Every once in a while she’d baked something nice for her friend, and had often wished she could do more. Now she wished she could offer to fill Lora’s gas tank, but Rebecca needed every penny for her future—for the journey ahead.

Rebecca slid into the backseat and caught Fannie in the middle of a conversation with her daughter. “Maybe she has extra time on her hands with her two youngest leaving the Amish. They both got jobs up in Grand Rapids, but that’ll bring only harm. I just hope their dat will be able to keep up with all the work on his farm alone. He might have to hire it out, although I don’t know how you can support a family doing that yet.”

Ten minutes later Shipshewana loomed ahead, but the woman’s mouth never slowed. Fannie didn’t talk to Lora, and she’d barely acknowledged Rebecca. Butterflies fluttered in Rebecca’s stomach. If this was how neighbors treated her, what could she expect from strangers . . . from the world? Yet even being alone was better than that feeling of helplessness when she’d watched her sister’s soul slip into eternity without being able to do one thing about it.

Rebecca straightened her shoulders and pressed back against the seat, staring out the side window as the first stores of Shipshewana came into view. 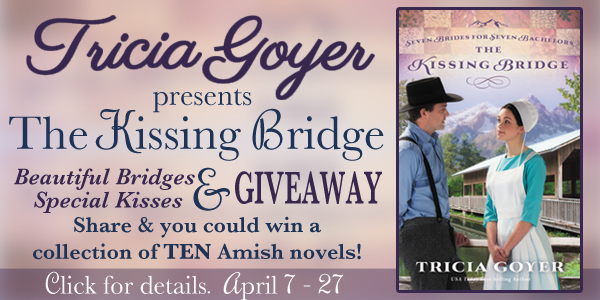 Want to link up to my Beautiful Bridges and Special Kisses Giveaway or looking for more info on the chance to win a collection of TEN Amish novels? Click here.

I have a few books on sale right now! The Swiss Courier and Chasing Mona Lisa are only $1.99! The Promise Box is only $3.99! And Generation NeXt Marriage is $2.99. You can also get my four World War II novels in the Liberators Series for $13.99.