You are here: Home / Twice Rescued Child / One Man’s Story of Hope Shares The Gospel

One Man’s Story of Hope 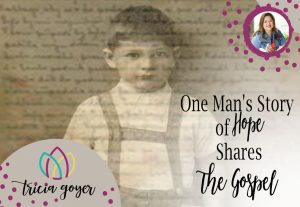 It’s taken me a while to process some hard news that I received recently. I received a text message that read, “Dad left us in favor of heaven.” Thomas Graumann is now in the arms of Jesus. I’m crying, knowing what a joy that is for him!

As you know, I wrote Tom’s story in Twice-Rescued Child.​

One Man’s Story of Hope

Aged eight, Thomas Graumann excitedly boarded a train in Prague, Czechoslovakia, to embark on what he believed was a three-month holiday. “Go to Britain, learn English, and when the Germans leave, you can come home again,’ his mother assured him. Thomas carried two suitcases and a bag of food. At the time he knew his country had been taken over by the Germans and now was under Nazi control. That was the last he would see of his mother and most of his Jewish family, who died in concentration camps. 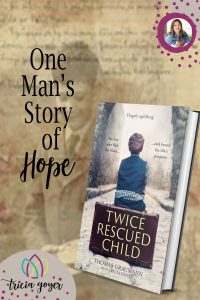 ​I am so HONORED to have known Tom and to have written his story. I first heard his story in 2008, and it didn’t leave me. I had it on my to-do list for YEARS, “Reach out to Thomas Graumann.” He was a Jewish child who was rescued from death’s grasp, and he lived his life sharing true HOPE.

A couple of years ago, I was praying, and I felt God say, “Contact Thomas Graumann NOW.” I reached out to the Czech pastor’s wife, who first told me his story, and I got Tom’s phone number again and called him out of the blue.​

“Yes, good. I’ve been praying about that.” He wasn’t surprised at all! I smile just thinking about that. Tom had worked for years writing down all the information about his life, at the urging of his son Paul. My job was to bring it to life on the page.

I set up a weekly phone date with Tom, who lived in Colorado. I’d call him every Thursday at 3:00 p.m. I’d go over different parts of his story, and he’d fill in more details for me. His memory was so sharp! He could remember dates and names throughout the nearly nine decades of his life.

I talked to my agent Janet Grant and told her, “We need to find a publisher for this book.” She found one in the UK. They wanted to release it Summer of 2020. I asked if they could release it sooner. I promised to finish it fast. I did, and they released it in the UK October 2019 and the United States in January 2020. Isn’t God good?!

One Man’s Story of Hope Shares The Gospel

Tears fill my eyes, knowing this: Tom held his story, his book, in his hands. He knew that his story would go on and that many others around the world would hear about the gospel. It’s already being translated into more languages. Tom is still a missionary even now!

I am so thankful I listened to that stirring that said, “Contact Tom Graumann NOW.” My life is richer for it. 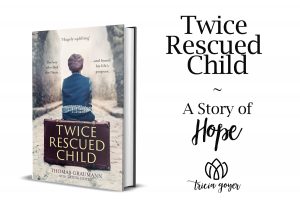 ​One Man’s Story of Hope

God, indeed, had wonderful plans for this rescued child! You can watch my interviews with Tom here: 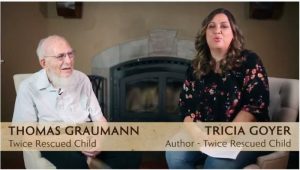 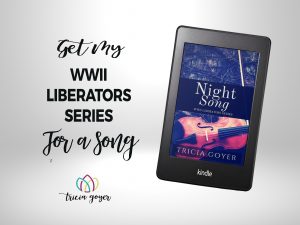 In honor of the 75th Anniversary of the Victory in Europe and the end of World War II, my Liberators series novels are all on sale now!

Learn more about the true tales of the Greatest Generation and what they faced during WWII in Europe against Nazi Germany. These amazing men and women gave so much and faced enormous personal sacrifice to stop the horror of Hitler.

It’s been such an honor for me to get to know so many of them and to hear their stories. Now you can read the stories inspired by the real-life events from their time in WWII.

From Dust And Ashes https://amzn.to/2y7BOH8I

Dawn of a Thousand Nights https://amzn.to/2YdwlJx

The Story Behind From Dust & Ashes