You are here: Home / books / Ordinary Women of the Bible Blog Hop

Welcome to my stop on the Ordinary Women of the Bible Blog Hop! OWB is an awesome series of biblical fiction featuring twenty-four little-known women from the Bible. I was privileged to be invited by the publisher, Guideposts, to write two of the books in this series. I’m not exaggerating when I tell you writing these stories was profoundly moving, even life-changing. I studied scripture like never before and dug into historical facts that made these women leap off the pages of my Bible. I’m excited to tell you about the first book, so read on! (obviously you can write any intro you want!)

Blog Hop Details: Participating is easy! Just hop over to each of the ten blogs listed here by October 11, read what they’ve written about their books, and write down the keyword in their blog post. You don’t need to follow any particular order. When you have all ten keywords, just fill out the entry form. You’ll be entered into a drawing for all twenty-four books in the Ordinary Women of the Bible series, many of them with autographed bookplates. The drawing will be conducted on October 12, so get your entry in before then. Plus, some of the authors are giving away their own goodies, so be sure to read every post!

Now, about my book… 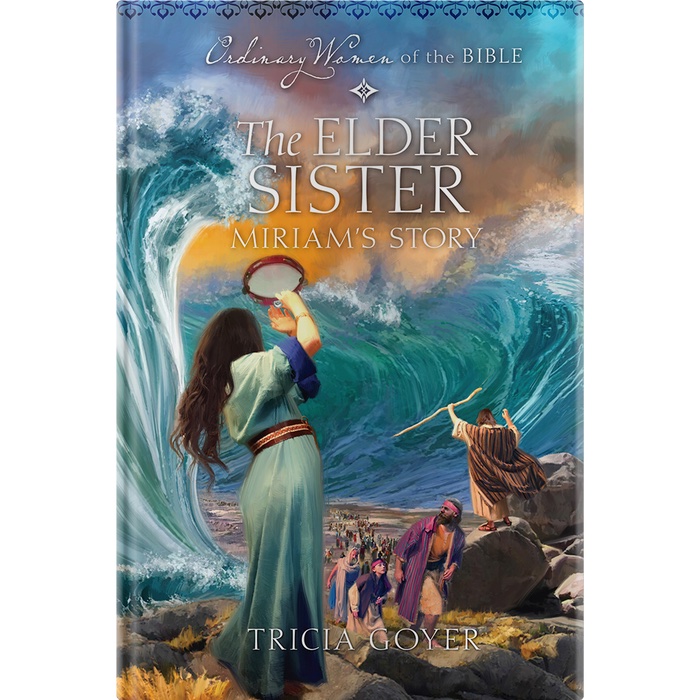 The Elder Sister is Miriam’s story.

When Miriam’s mother gives birth to a perfect baby boy, her family feels something other than the usual joy that comes with new life—they feel dread. Egypt’s pharaoh has decreed that every boy born to a Hebrew woman is to be cast into the Nile and drowned. But through the wisdom of El Shaddai within her, Miriam and her mother know that to save this baby they must let him go.

Now, decades later, Miriam learns her brother has returned to demand that Pharaoh let the Hebrew people go free. But as supportive of Moses as Miriam desires to be, something other than the Voice stirs within her. After her years spent as a leader and prophetess among the Hebrews, can Miriam set aside her pride and accept the calling God has given her—and her baby brother?

A few weeks ago I was talking with my friend, Joanna, sharing about some of my recent struggles, especially with my attitude.

“I’ve always known you to be a positive person,” Joanna told me.

I chuckled, “That’s because most of the time we spent together was before John and I adopted seven more kids!”

When Joanna and I met, I only had three children. In that season of life, I was busy raising kids, volunteering at a crisis pregnancy center, and writing. I was busy, yes, but when John and I started adopted kids from hard places we transitioned from “busy” into survival mode. Overwhelmed with the added chaos and mess (not to mention kids’ outbursts and anger), I found myself complaining a lot. So much so that I knew things needed to change. That’s when my family and I took drastic measures and attempted to go a year without grumbling—and I wrote about our year in a book, The Grumble Free Year.

It wasn’t an easy year, and our attitude-adjusting journey has made me sympathetic to women in the Bible who’ve faced challenging circumstances and didn’t handle them well. Women like Miriam.

The Highs and Lows of Miriam’s Life

In the Bible, Miriam may best be known as the big sister who helped save her baby brother from certain death. Daughter to Amram and Jochebed, and sister to Moses and Aaron, we first meet Miriam as a young girl who watches her baby brother being placed in the Nile in an effort to save his life (Exodus 2:4).

The next time we see Miriam, she is a leader along with her brothers, taking the Israelites across the Red Sea into freedom. Exodus 15:20 says, “Then Miriam the prophet, Aaron’s sister, took a tambourine and led all the women as they played their tambourines and danced” (NLT). She led the now-freed nation to sing before the Lord, exclaiming his triumph over the Egyptian horses and riders hurled into the sea.

We know nothing of Miriam’s life between child and prophetess, but while Moses was a desert shepherd, she lived with her people in Egypt. And to be labeled a prophet, God must have used her greatly there. If I were to guess, those around Miriam no doubt witnessed her strength and godliness during their captivity. And in their moment of freedom, Miriam might have believed that the hardest portion of her life was behind her. Yet, as I’ve also discovered, while it’s easy to trust God for big miracles, harder is walking through the daily grind of life.

I tell my kids often that we are prone to complain when have unrealistic expectations and are hungry or tired. And even though the Israelites were now free from Egyptian rule, they still had a desert before them.

In the book of Numbers, we see the Israelites complaining a lot. They complained about the hardships, and they longed for the food from Egypt. Miriam, still a leader, complained too. She and Aaron criticized Moses because he’d married a Cushite woman. Miriam also felt overlooked and unappreciated. Along with Aaron she complained, “Has the Lord spoken only through Moses? Hasn’t he spoken through us too?” (Numbers 12:2).

In the verses to follow, God put brother and sister in their place. God clarified his special relationship with Moses (baby brother), and after God’s presence departed, Miriam looked down to see her skin as white as snow from leprosy. This is a long way to fall from the revered prophet who’d led the people in worship at the sea’s shore. Thankfully, God’s punishment lasted for only seven days, but I imagine Miriam had a better understanding of God—and her position as a servant-leader—after that.

Here are a few things we all can take away from Miriam’s example:

Thankfully, Miriam wasn’t completely written off in history. Micah 6:4 says, “For I brought you out of Egypt and redeemed you from slavery. I sent Moses, Aaron, and Miriam to help you” (NLT).

By the end of her life, Miriam no doubt understood a few things better, mostly about her place as God’s servant and how her words (whether praise or grumbles) impact herself and others. It’s a lesson I’m learning, too. No matter how overwhelmed I am with the chaos and messes, the busyness, and the kids, I can either grumble about it or I can lift my face to heaven and remember all that God has done for me. And when I choose gratitude and praise, it’s a wonderful example to others.

I know what Miriam would tell me to do.

My Giveaway: I’m giving away an autographed copy of The Elder Sister. Enter via Rafflecopter below! The winner will be drawn on October 12th. If you win the Blog Hop grand prize of all 24 books in the OWB series, you can select another of my books instead.

Thanks for stopping by. Now, hop on over to the next stop on the Ordinary Women of the Bible Blog Hop!