You are here: Home / Uncategorized / Remembering Pearl Harbor and a Dawn of a Thousand Nights 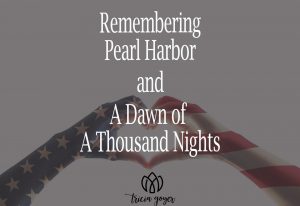 Remembering Pearl Harbor and a Dawn of a Thousand Nights

Few days capture the shock and horror of war as much as Pearl Harbor Day. Seventy-eight years ago, on December 7, 1941, Japan’s surprise attack on Hawaii cost 2,403 American lives and left over 1,700 more injured. My friend, Earl Williams, shared his story of that day with me and inspired a scene in my book A Dawn of a Thousand Nights. I will forever be grateful for his friendship, his story, and his service to our country. He, along with many, many others, bravely answered the call to defend our country in World War II. Their stories have both haunted and compelled me to write novels to portray the courage and tremendous valor shown by so many during that time. I will hold them in my heart always and will be forever thankful for their sacrifices.

Here is the story from Earl, in his own words. A story I’ll always remember.

On December 6, 1941, I was an Army Air Corps Sergeant with a First Class Air Mechanics rating. It was my first trip across the ocean, and I was assigned, along with five others from the 38th Reconnaissance Squadron, to departed Hamilton Field on December 6, 1941. The first stop of destination was Hickam Field, Hawaii.

The flight to Hawaii was approximately 14 hours arriving, and we arrived at about 0800 hours local time. From the pilot’s compartment, I peeked out and first sighted Diamond Head. It was my first realization that we’d made it. Hawaii.

Lieutenant Schick turned to me with a smile. “I would take a million dollars for this trip.”

With a wide grin, I returned to the radio compartment to take in more sights and converse with Sergeant Bruce and Private Lee.

As we flew past Diamond Head, Sergeant Bruce who had been to Hawaii before, pointed out some of the notable sights: Diamond Head, Waikiki Beach, and the Royal Hawaiian Hotel.

Yet as we passed over Waikiki Beach, it wasn’t the sand the drew out attention. Instead, it was the three-fighter type aircraft passing off our right wing, speeding in the opposite direction.

Sergeant Bruce offered them a wave of his hand. “Those hafta be U.S. Navy aircraft sent up to escort us in to Hickam.”

How wrong he was.

The words were barely out of his mouth when plastic canopy over the 50-caliber machine guns disintegrated. Some welcome that was!

My first thought was that the U.S. Navy had mistakenly loaded live ammunition in their guns.

The bullets continued piercing the radio compartment, and the cotton filler in the soundproofing tumbled in the air like snowflakes.

Attempting to catch my breath, I crouched behind the armor plating on the aft wall of the radio compartment. Next, bullets pierced the pyrotechnic flares we carried in the radio compartment for signaling purposes. Smoke and a very hot fire immediately filled the compartment. To make matters worse, I felt a bullet slice through the top of my head.

I hurried to the pilot’s compartment as blood streaming down my face and into my eyes and mouth. My hair caught fire, and I felt a burning sensation on the back of my ears and neck.

Sergeant Bruce and Private Lee also fled the fire, running to the rear of the aircraft.

As I entered the pilot’s compartment the splattering of bullets could be heard hitting the armored plate behind the pilot and copilot, then ricocheting around the compartment.

Lieutenant Schick perched on the edge of the observer’s seat, and I from the blood on his clothing I noted he was hit. It mustn’t have been a bad hit, because the Lieutenant was fully alert.

“What’s the best way to get out?” Lieutenant Schick asked, attempting to remain calm.

“The upper hatch or the lower entrance door,” I told him.

He hurried out the lower door, and I followed. Yet the danger was far from over. Fighter planes continued to strafe our aircraft. Lieutenant Schick exited the aircraft, towards the safety of the buildings, but he hadn’t gotten far before the bullets hit him, and he was killed.

I waited, crouching behind the aircraft landing gear until the strafing stopped. Then I darted toward the hanger line, meeting up with Lieutenant Reid the copilot and Lieutenant Taylor the navigator. Both had minor wounds.

Around us, there was a flurry of activity as servicemen set up gun positions. We asked for directions to the base hospital. Since I did not know the extent of my wound, I joined the two officers in search of aid.

Wounded and dying men lay on stretchers outside the hospital lawn. We entered the hospital and were immediately provided attention because we were identified as air crewmembers, and they wanted us to get back to duty. The hair around my wound was clipped and a dressing applied. I was then given a tetanus shot and letter TET painted on my forehead with a read antiseptic.

At that point, I lost contact with Lieut. Reid and Taylor.

After treatment at the hospital, I started back to the flight line where the remains or our aircraft was located. As I passed the large barracks located adjacent to the parade grounds, enemy bombers began dropping bombs on the barracks. I sprinted as fast as I could towards the flight line, avoiding the continuing enemy fighter fire. When it appeared that the enemy activity had ceased, I located Sergeant Bruce. We made inquiries as to the location of our friends, but to no avail.

For the rest of the day, we helped in the frenzy, helping to string telephone wire between gun positions. Only later that we learned that Lieutenant Schick had indeed been killed and Air Cadet Beale, Master Sergeant Pouncey, and Private Lee had been seriously wounded.

I was one of the lucky ones who made it on the Jap’s first attack on the U.S. It was my first taste of war, but not my last. As a member of a new crew, I went on as a combat crewmember to fly 55 combat missions out of Australia and New Guinea for which I was award the Distinguished Flying Cross.

Some may think it was an odd coincidence that we met the Japs in the sky that day. And it was. Two sets of planes, crossing two ends of the ocean.

Do you want to read the story inspired by Earl’s story? My novel Dawn of a Thousand Nights is available here: https://www.amazon.com/dp/0802408559?tag=triciagoyersw-20 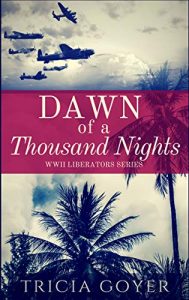