I’m so excited to talk to Steve Cleary in today’s episode! You can listen above or on iTunes! I’d love it if you shared with your friends! 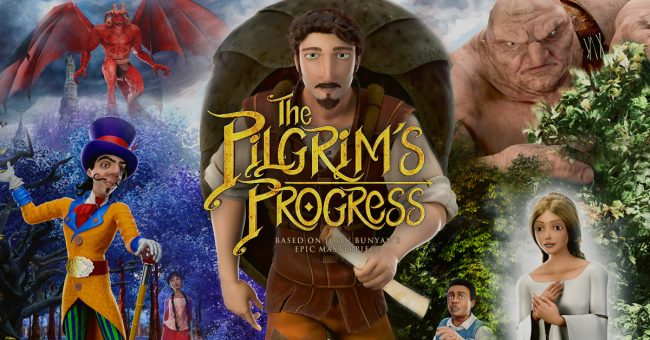 A man named Pilgrim discovers a book, and the more he reads it, the more he is convicted of sin and judgment, and a burden begins to develop on his back. Obsessed with discovering the truth and escaping his town, the City of Destruction, he ventures outside the forbidden borders and begins his journey to find a Celestial City ruled by a good and noble King, meeting friends and foes along the way.

The Pilgrim’s Progress was written over 340 years ago, by John Bunyan when he was in prison. The story has been smuggled to the underground church during communism, banned for a time in China, and has sold more copies than any other book other than the Bible!  The journey of this remarkable work continues as Revelation Media brings the story to a new generation using state-of-the-art CGI animation.

A Film with a Missions-First MindsetThe filmmakers did not just make The Pilgrim’s Progress to entertain and share essential truths with American Families. The film was created to bring the story of the journey a Christian life to people around the world, especially those in regions where being a Christ-follower may mean persecution.
Funds raised from donations to Revelation Media and from ticket sales to see the film in theaters will go directly to translating the film into the world’s top 100 languages and dialects. Commitments have already been secured t fund no less than 20 key languages. The character’s voices will be re-recorded with popular talent from each individual region of the world. The first $25K raised will fund the airing of The Pilgrim’s Progress on Iran’s second-largest TV network – realistically reaching 8 million Iranians, in their native languages.
Because the film is animated, and it’s fiction, it is not viewed by hostile governments as a threat to their people like, say, The Bible or The Jesus Film. The Pilgrim’s Progress offers missionaries, leaders of house churches, educators, and pastors around the world a free resource to share Gospel-truths via the powerful story of Christian and his burden.
In theaters April 18 and 20.
Click here to purchase tickets at a theater near you.

Links from the show

This Week’s Walk It Out Scripture

Sponsors
Walk It Out

A special thanks to Life Worship for the use of their song Wide Open Space for my theme song!