You are here: Home / WWII / We Meet Again by Charles Torluccio 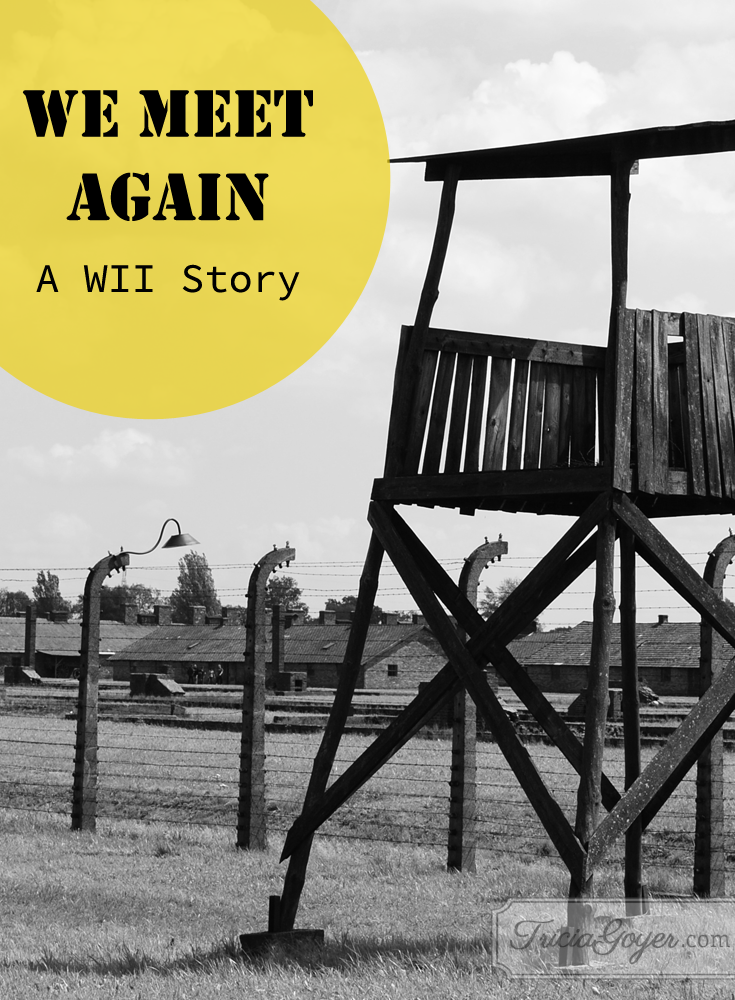 One morning in 1990, my wife Doris and I were having morning coffee and reading the newspaper when I noticed that a Holocaust survivor named George Topaz was having a book signing in our town. As I read about Mr. Topaz’s experiences, I felt my skin tingle. I grabbed my cap with the 11th Armored Division emblem on it and told Doris we had to make that signing.

We sat off to the side while Mr. Topaz talked with those who’d purchased copies of his book, The Iron Furnace. Hours later, after the last person had left, Mr. Topaz lifted his head and looked to Doris and I, surprise we still waited. Then he looked to the emblem on my cap. Instantly, his eyes grew wide and he smiled. Before I could say a word, the man jumped from his seat and swept me into his arms.

“You were there. It was your division that liberated our death march in 1945!” Mr. Topaz spurted.

I thought back to that day as I was again pulled into this man’s strong embrace. It was a day I’ll never forget.

The horror began when our armored division drove up to the empty camp Flossenburg. The Nazi’s had heard we were coming and had fled. All that remained were the skeletal bodies of prisoners—silent testimonies to the horror. As an armored division, we couldn’t stop long and soon moved forward, only to spot dead bodies lining the roads. I was just a young kid straight out of high school; a replacement for killed or injured troops. Nothing had prepared me for the sight of thin arms and legs poking out of striped uniforms, their distorted faces staring at us, reminding us we were too late.

Not too much further, we rounded a hill and noticed a staggering parade of prisoners. There were thousands of them, and they looked like broomsticks with tennis balls on top. Upon seeing us they cheered, realizing they’d beat all odds and had survived the war.

“I will never forget that day forty-five years ago,” Mr. Topaz continued, looking into my eyes. “It’s the day I again became a free man. The only thing I wish I knew was whether we were liberated on April 22rd or April 23th. I was so weak, I hadn’t paid much attention at the time.”

“How?” He scratched his head.

I placed a hand on George’s shoulder. “It’s hard to forget the events of one’s nineteenth birthday.”

“April 23rd is your birthday?”

I nodded, my eyes brimming with tears. George and I discovered that day that we only live ten miles from each other. When we parted, George told me he’d be in touch. A few weeks later I received his phone call.

“Happy Birthday!” George’s voice called out over the phone.

“Happy Liberation!” I cheerfully answered back.

After we hung up, George came over and we celebrated our day with brunch and presents. George told me about his life in a prison camp and about the many things he’d done to survive. The Nazis needed a shoemaker, and he was their next shoemaker. The Nazis needed a plumber; he was their next plumber. He didn’t know a thing about plumbing, but that’s what got him through.

George and I have been friends ever since. Recently, we’ve also met a third man who was in the same death march that our division liberated. He also lives close by and joins in our celebration.

Every year, I make sure I’m early to bed on April 22nd. That’s because George and I have a contest to see who will be the first to call. Sometimes George wins, sometimes I do.

“Happy Liberation!” I tell him as the dawn breaks on our new year.

“Happy Birthday!” he answers. And I smile, knowing that George’s friendship, and our amazing connection from a continent way, makes my birthday happy indeed.