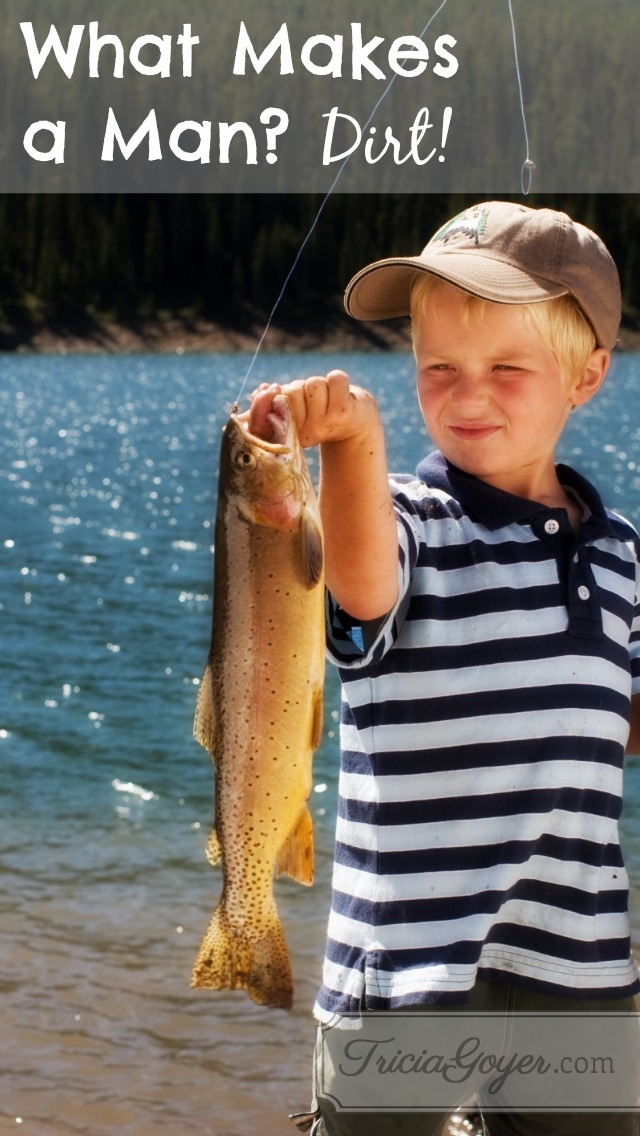 What Makes a Man? Dirt!

I’m a mom of three boys and three girls. I’m also the mom of a grandson and a granddaughter. We believe in being even-Steven around here.

Recently the kids were playing Simon Says, and it went something like this:

What are men made of? How to #parent and raise your boys into men (@TriciaGoyer):

Yes, that is right. There was no “Simon Says” followed by a cute action. Bella looked at him as if he lost his mind. Alyssa just walked away.

My three-year-old son loves dirt, bugs, dump trucks, sand, sticks, ooze, slime, snot, and anything that his sisters deem as disgusting. And, Moms, I am glad for that!

What are men made of? The ability to handle dirt and hard jobs. Jobs most of us women don’t want to do. Just in the last year my husband has loaded and unloaded a moving truck. He’s cleaned gutters, mulched thirty-plus bags of oak leaves, despite the fact I was the one who HAD to have a house with old trees.

He’s changed the oil, fixed the faucet, and installed a new washing machine. He dealt with the mess when our old washing machine (on the second story!) flooded. He cleaned a jumbo-size amount of laundry soap from the carpet (after our son thought it would be fun to dump it out). Basically, John is wonderful about dealing with all the stuff I don’t want to deal with. When anything’s too messy, I depend on John. When anything breaks, I turn to him.

Now, I know not all men are super handy. My stepdad wasn’t. If a handle fell off the kitchen cabinet, it stayed that way. (We just learned other ways to open the cabinet.) Light bulbs stayed burnt out, too. Still, if there was a messy job that had to be done, like chopping wood or cleaning out the fireplace, he did it. In Genesis I’m pretty sure that while Adam was off getting messy with the animals, Eve was getting a tan—after all no tan lines!

Okay, that last line was a stretch, but while men are drawn to messy work, women are often OK with letting them be drawn that direction. It’s funny, though, that the same women who cheer their men on when they change a flat tire later chastise their sons for getting too dirty, yelling too loudly, or making a mess.

I used to be this way–sometimes I still am. (Dirt stuck onto a snotty face still gets to me.) But overall I’m learning that while it’s important for men to be godly, respectful, honoring, truthful, brave, and all those other awesome traits, it’s important for them to be dirty, too. Believe me, if you foster this trait, your future daughter-in-law will thank you some day!

How can you encourage your son to grow into a man? Dirt! @TriciaGoyer

Steps You Can Take

Thank you for the men in my life who are willing to get their hands dirty. I pray that you would change my attitude about my son’s tendency to like all things messy and dirty; help me to replace my natural tendency to scold him with a positive attitude.

Balanced: Finding Center as a Work-at-Home Mom
Bringing Up Boys