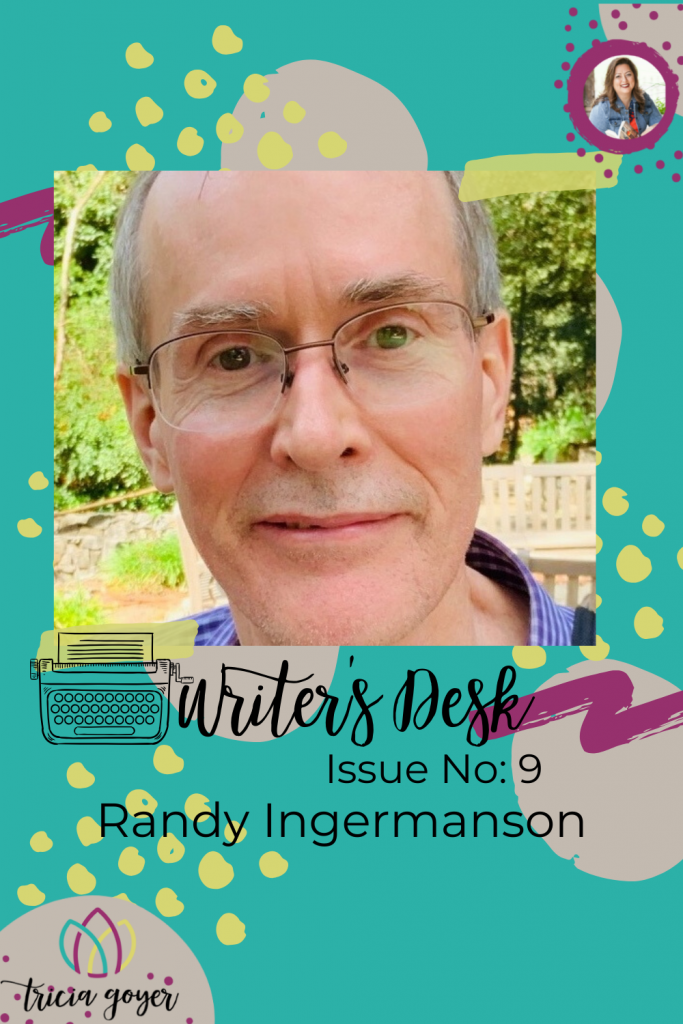 We’re so excited to have Randy Ingermanson featured on this week’s writer’s desk. Randy Ingermanson is the Christy-award-winning author of 7 novels.  Randy earned a PhD in theoretical physics from UC Berkeley, so why does he write Christian fiction?  Because he loves fiction and he writes from a different angle than anyone else in Christian fiction.  Randy reads Hebrew and has worked five times on archaeological digs in Israel.  His mission is to take you on an adventure to first-century Jerusalem and show you an amazing new world. Be sure to stick around until the end of the post for more about her most recent release plus a chance to win a copy!

Yes, I get up every morning sometime between 6 AM and 7 AM. I spend half an hour walking to get myself awake and then I write for an hour. I always write in the same spot, in our living room, in the chair I inherited after my dad died.

Anytime I get past my natural laziness and just start working. It normally takes me a minute or two to get focused, and then I lock-in and get productive. If I’ve learned anything in life, it’s to “just start.” It’s very easy to do something else because “I don’t feel like it.” But as soon as I start working, I feel like it. A famous writer used to say, “I write when the spirit moves me. And the spirit moves me every day.” There’s a lot of truth in that. Just start.

I don’t eat when I write. My wife makes me a big bottle of vitamin C water every day, and my assignment is to drink that.

That’s hard. But as noted above, I’ve learned to just start. Once I’m rolling, I’m hard to stop.

Now there can be a problem when I just start and the words don’t come. When the words don’t come, it always means that I didn’t make a plan. So instead of trying to force out the words, I spend a few minutes making a plan. Then I get working to execute the plan.

I invented something called the Snowflake Method, which is a way of designing a novel before writing it. This method is widely used all around the world by tens of thousands of writers. I have a page on my website that explains it in detail: https://www.advancedfictionwriting.com/articles/snowflake-method/

There are three things you need to do constantly, for the rest of your life:
1) Write on a regular routine. Daily is good, but if not daily, then on a regular schedule.
2) Get critiqued on a regular routine by someone who knows how. Monthly is good. Never ever ever take advice from someone who doesn’t know how to critique. You don’t let just anyone do brain surgery on you. A critique of your novel is far more delicate than brain surgery. You have been warned.
3) After you stop crying over the horrible things the critiquer said about your beautiful baby, buckle down, and figure out how to do better. This often means getting a book on the weakness that was identified and reading it. 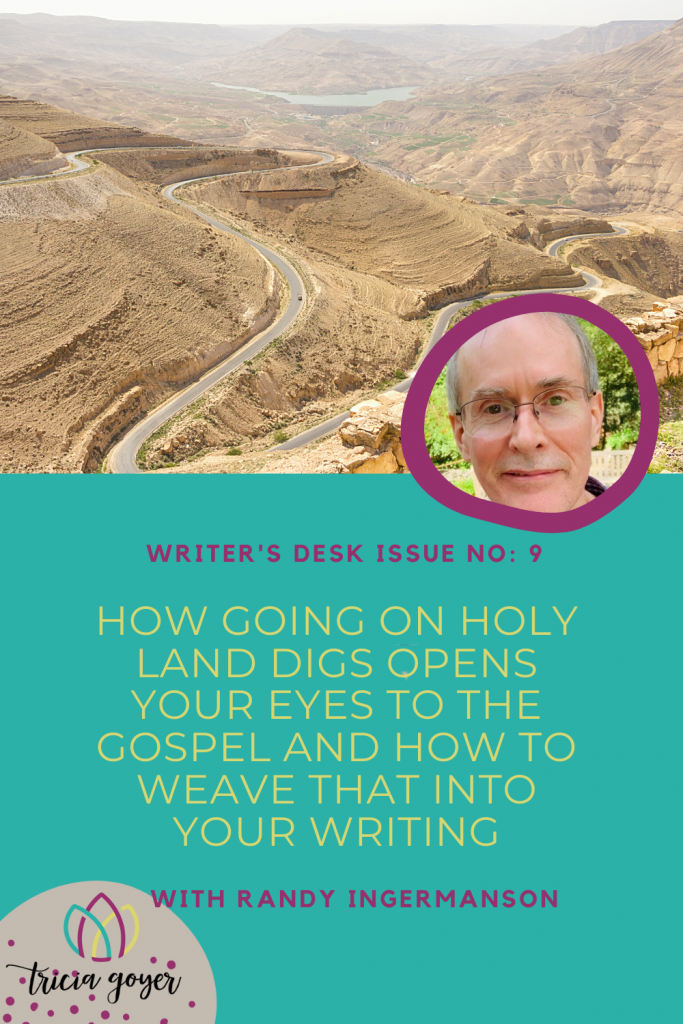 You have been on multiple digs to the Holy Land. How has going on these digs opened your eyes to the gospel and how do you weave that into your writing?

The Bible is an amazing book, but often we miss things because we don’t understand the geography. Going to Israel has opened my eyes to the world Jesus knew. I have lived many weeks in Jerusalem because that’s where I dig every year. When you live there long enough, you get a deep feel for how the city is laid out. And I’ve also spent a lot of time in a rental car, driving around Galilee with my wife. So when I sit down to write a scene, I don’t have to “make stuff up.” I open up my Photos app and browse through my 10,000+ pictures until I find some shots of exactly the place I’m writing about. It’s like being there all over again. And being there allows you to write the scene in a way that’s impossible to fake. As an example, when I wrote the scene where the villagers in Nazareth take Jesus to the “precipice” to push him off, I didn’t have to make anything up. I’ve been there. I spent time there imagining how the scene would play out. I’ve been to the exact spot where Jesus was arrested. I’ve got pictures. When I go to write that scene, I’ll put in details that could only be written by somebody who’s been there. When you absolutely know what you’re talking about, your reader knows.

No, it’s 10 steps, and they’re all essential, so it really can’t be broken down further. The very first step is to write a one-sentence summary of your book. This will serve you all your life when people ask you what your book’s about. You don’t have to think. You just trot out your one-sentence summary. If they’re in your target audience, they’ll say, “Tell me more!” If they’re not in your target audience, they’ll say, “How about those Red Sox?” So your one-sentence summary is an easy way to identify your target audience. They are the people who resonate with that sentence. As I said, there are nine more steps, but if you agree that the first step sounds like it’s useful, then you may find the other nine useful too. If you don’t like the first step, there’s no point in telling you the other nine, because you’ll hate them even more.

Be sure to catch the video interview with Randy Ingermanson HERE, and be sure to join Avid Readers of Christian Fiction group so you don’t miss any of our other fun author LIVE chats coming up!

More about The Son of Mary: 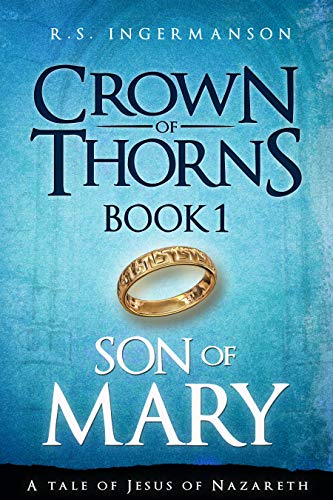 Nazareth has been cruel to my mother, more cruel than any village ever was.

My mother bears her shame in silence.

Some righteous man, a prophet, said a word over me when I was a babe in arms. He told how I will redeem Israel when I grow to be a man. Now I have grown to be a man, but I do not know how to redeem Israel. The scriptures do not explain the matter.

Only I am no man of the sword. I wish with all my heart to redeem Israel, but HaShem, the God of our fathers, must tell me how.

Lately, there came a new prophet to Israel, who immerses for repentance at the river Jordan. I went to ask the prophet how I should redeem Israel. He said I am to smite the four Powers. I asked what are the four Powers. He could not say, but he said HaShem will reveal the matter to me. I wish HaShem will reveal the matter, only I am not a prophet. Not yet.

But I will be.

But I am afraid to redeem Israel.

But HaShem will show me the way.

I will smite the first Power.

Or I will die in the trying.